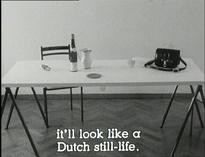 LOOKING BACK
A Video Selection From The Argos Collection For Contour On Tour: Video Art In The Flemish Parliament
21 March – 11 July 2012

Since the 70ies, Belgian video art is internationally known for its avant-gardism, its eclecticism and its multiples crossovers with other disciplines. In the past, but incontrovertibly also in the present time, Belgian artists have been pioneers in the use of the medium and the development of multifaceted registers thanks to the video techniques and their personal approaches. Because they stand out with their imaginative ideas and their zest to create unconventional work with a personal handwriting, Belgian artists’ film and video makers have created their own free zone.
Although, this selection represents a small cross section among thousands of titles archived at Argos, these programs try to illustrate recurrent aspects of the productions released during the 70ies and the 80ies.
The first program highlights two documentaries by Jef Cornelis and Stefaan Decostere - two major figures of Flanders television – which remain more than a report about their subject. Ijsbreker 01: Panamarenko is a portrait of the artist Panamarenko, but the transmission also aspires to tear down the high walls around the art world and, at the same time, breaks the codes of live television. On the other hand, Er ligt een video in de soep, unconventional in style and international in scope, presents an overview of the history of video art till 1983.
Ria Pacquée’s and Lili Dujourie’s early works compose the second and the third programs. Performance Metro Meir is a recording of a performance that Pacquée did in 1979 while, in Madame going to a dog show, Pacquée takes on the character of a lonely middle-aged lady who walks and wonders around a dog show.
In Dujourie’s work, everything is centred on the exploration of the body. Dujourie draws attention to the space beyond the visual field and embraces duration in order to bring to us in a dimensionless other reality of the imagination.
The last program compiles different works which experiment with the techniques and the languages of the medium. Among the titles, the collective artists’ film, which was presented by Jacques Charlier as a contribution to the 1971 Paris Biennale, is a truly gem and testimonies, due to the fact it had been considered lost, the fundamental role of the Argos preservation program.
www.argosarts.org