More Than a T-Shirt 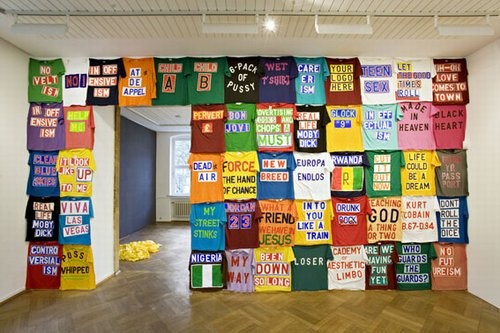 More than a T-Shirt, exhibition view
MORE THAN A T-SHIRT

From 14 November 2009 – 24 January 2010 the Bielefelder Kunstverein shows the thematic group exhibition »More than a T-Shirt«. It centres around the T-shirt as an artistic medium. The exhibition shows a selection of exemplary projects by international artists, designers and fashion designers.

The T-shirt has long been more than a piece of clothing. It is a medium for the »me« and the »us«, a wearable means of communication in the information society, a medium of expression in the areas of politics, economy and culture. Printed or unprinted, the T-shirt testifies to local as well as global cultural trends and to social movements too. Right up to today, the T-shirt as a symbol has moved between brand conscious consumption and do-it-yourself culture, between sweat-shop production and fair trade.

The T-shirt has emancipated itself from fashion. It has refined itself to become an artistic form of expression in its own right. The transition here from fashion object to other cultural spheres such as design, art, literature, music, as well as to pop culture, a culture of conviction or a subculture is gradual. Time and again, the T-shirt surprises as an icon of the Now or as image carrier for a collective memory.

The projects shown in the exhibition take up these diverse developments in cultural history. Not only T-shirts are on display, but especially works which, in a wider sense, engage with the medium of the T-shirt as an object or as a carrier of text or images. At the Bielefelder Kunstverein, there are accordingly represented, in addition to numerous T-shirts, the media of sculpture, painting, drawing and video, as well as the documentation of actions, performances or dance events too. The projects selected date mainly from the period: 1990’s until today.

This exhibition is kindly supported by Sparkasse Bielefeld and Stadtwerke Bielefeld GmbH.
www.bielefelder-kunstverein.de