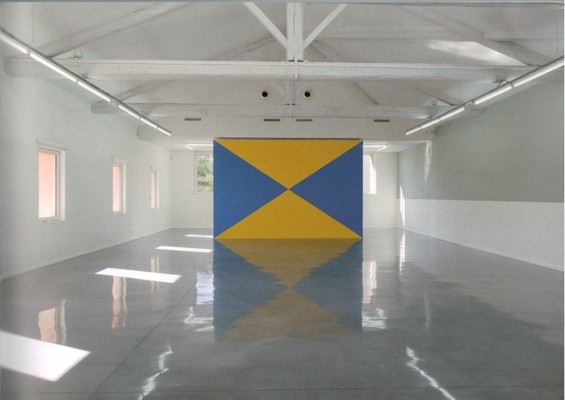 Christopher Grimes Gallery is very pleased announce an exhibition of new work by Carlos Bunga and Olivier Mosset. This exhibition highlights the juxtaposition of two divergent artistic approaches to painting and challenges the viewer to examine their understanding of the medium: from Mosset’s two dimensional wall murals to Bunga’s three dimensional cardboard constructions; from Mosset’s seeming self-sufficiency and “authorlessness” to Bunga’s tactile originality and authenticity; to the monumentality of Mosset’s installation and the intimacy of Bunga’s paintings.

Olivier Mosset emerged in the 1960s and has since been associated with a multitude of art historical movements, involving himself in both the European and American artistic and critical contexts. In anticipation of many artists, who in the 1980s would use appropriation to critique Modernist authority, Mosset called into question the painter’s gesture and signature by sharing styles and dissolving authorship to reach a “degree zero” of painting. This line of questioning continues in this exhibition where he will present a wall painting composed of four yellow and blue triangles in the form of a motif found from a mural discovered in Cuernavaca in Mexico. In addition, a horizontal grey and white wall painting will extend the length of the nearly 45-foot wall spanning the Main and South galleries. Mosset’s paintings possess a strong materialist sense that recalls Malevich, Reinhardt or Stella while simultaneously maintaining a subtle relationship to the readymade and appropriation.

Carlos Bunga’s work can be described as painting that exists at the intersection of architecture and sculpture. Bunga is well known known for his large-scale installations made of common, unassuming materials. These installations call to mind Kurt Schwitters’ Merzbau project for their built quality and the creation of architecture in already existing spaces. Like Schwitters, Bugna’s installations respond to existing architecture, yet Bunga’s installations are painted in monochromatic planes of color and are built with the intention of ultimately being destroyed. In the South gallery, Bunga will present one such intervention in cardboard, tape and paint in response to the architecture of the space. In the Main gallery he will show a series of new “construction” paintings that are much more intimate in nature, made from the same materials used for his installations. Although smaller in scale, they nonetheless stem from his interest in the process of painting and spatial issues as well as the presence of the body.

Olivier Mosset (b. 1944 in Bern, Switzerland) lives and works in Tucson, AZ. Mosset first became known in France for having been part of the famous BMPT group alongside Daniel Buren, Niele Toroni and Michel Parmentier. Since then he has exhibited extensively in galleries and museums worldwide. In 2012 he was the subject of a solo exhibition at Kunsthalle Zurich, and a retrospective of his work, Olivier Mosset: Travaux/Works 1966-2003, was presented at Musée Cantonal des Beaux-Arts, Lausanne, Switzerland and Kunstverein St. Gallen Kunstmuseum, Switzerland (2003). His work has been included in several group exhibitions including Manifesta 10, Hermitage Museum, St. Petersburg, Russia (2014); Whitney Biennial, Whitney Museum of American Art, NY (2008); and he represented Switzerland in the 44th Venice Biennale (1990). His work is in the collections of such institutions as Museum of Modern Art, New York; Centre Pompidou, Paris, France; National Gallery of Canada, Ontario; and Musée Cantonal des Beaux-Arts, Lusanne, Switzerland among others.
www.cgrimes.com