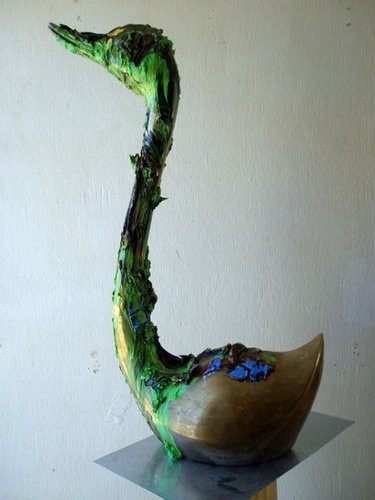 Christopher Grimes Gallery is please to present works by Olivier Mosset. Olivier Mosset is one of the most influential artists working today. Mosset is firmly committed to blank abstraction, in which empty canvases become fields of limitless reflection. His work presents the viewer with “nothing to look at and therefore everything to consider”. In his most recent works, Mosset expresses the collapse of painting as a meaning-making gesture. Critic Jean Baudrillard states, “ridiculing all the heavy armature of language and communication.”
Olivier Mosset was born in Bern, Switzerland and lives and works in Tucson, Arizona. He first gained prominence in Paris the mid 1960’s as a member of BMPT (Buren, Mosset, Parmentier and Toroni), an influential group of radical painters. Since then, Mosset has exhibited extensively in galleries and museums worldwide, including a two part retrospective, Olivier Mosset: Travaux 1966-2003 at the Musee Cantonal des Beaux-Arts Lausanne and the Kunstmuseum St. Gallen, Switzerland, as well as the being featured at the 44th Venice Biennale and the 2008 Whitney Biennial.
The South Gallery will feature new sculptures by Thom Merrick. Since his first New York exhibition in 1987, the summation of an exhibition could be said to be "against method" encompassing drawing, installation, painting and sculpture. "Concurrent hypotheses" riddle the last twenty odd years of his output. The current works began as oil paintings, but were found to be unsatisfactory until the scrapped off oil painting was deposited on the figurines. The faulted combinations oddly mimic the shape of the stone hills around his studio in the Mojave Desert.
Thom Merrick received his BFA from the San Francisco Art Institute. He lives and works in New York and the California, Mojave Desert Since the late 1980s he has had numerous exhibitions in galleries and museums throughout the United States and in Europe. His works have been exhibited at prestigious institutions such as PS 1, New York, the Museum for Modern Art, Frankfurt, and Documenta IX, Kassel as well as participating in Without Sun, in 2007, curated by Carole Ann Klonarides at the Christopher Grimes Gallery, Santa Monica and HDTS and 2008 California Biennial, curated by Lauri Firstenberg, at the Orange County Museum of Art..
www.cgrimes.com