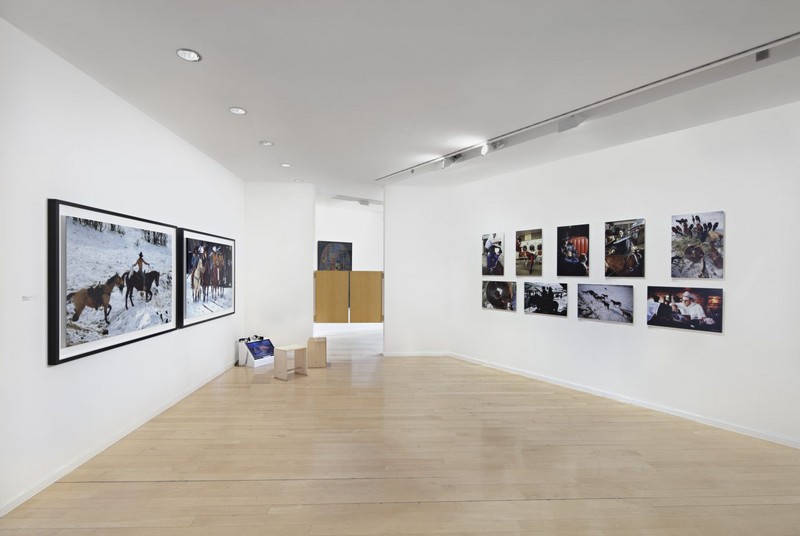 The Daimler Contemporary is simultaneously holding exhibitions by two artists who both have biographical roots in Esslingen in Baden-Württemberg, and are also known for artworks produced in the USA: Adolf Fleischmann and Dieter Blum. The Fleischmann Retrospective furthermore continues the >Classical : Modern< exhibition series, through which South German artists from the Daimler Art Collection since 2001 have been discussed in a broader, European art context

For our Adolf Fleischmann (1892 – 1968) exhibition – the first Berlin retrospective of his work – we will be exhibiting around sixty paintings, collages and gouaches. The central focus is on his significant late work from his New York period. Dieter Blum (*1936, now living in Düsseldorf) was invited to a shoot for Marlboro in the USA in 1992. This resulted in a series comprising around sixty photos, only fragments of which have previously been exhibited; it was on the basis of this series of pictures that Blum became the most widely and internationally known photographer in this field.
In the context of the Adolf Fleischmann retrospective, we will also be presenting commissioned artworks, created for the Daimler Art Collection by Hartmut Böhm and Andreas Schmid.

Dieter Blum, born in Esslingen in 1936, was invited to a first test shoot for Marlboro in the USA in 1992. The pictures from this shoot, which have never previously been exhibited, provided the basis for Blum’s subsequent fame as the most internationally famous photographer working in this context. Dieter Blum was a strong influence not only on the Marlboro campaign, but on the product advertising and documentary photography of the era in general. A short while later, his photographs provided the ‘material’ for the famous cowboy photos by Richard Prince – making his work indirectly relevant to the art context. Blum has been creating commercial and free artistic photography since the 1960s. His photographic series are dedicated to themes such as Africa, Nippon, German landmarks, Dance, Shell, and portraits of artists and musicians. His artwork has been exhibited in numerous German and international galleries and museums. In 2015, Blum received the Médaille Vermeil from the Societé Arts-Sciences-Lettres in Paris for his life’s work – the first photographer, and one of only a very small number of Germans, to do so in the society’s 100-year history.
www.art.daimler.com