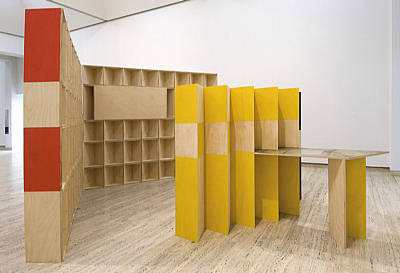 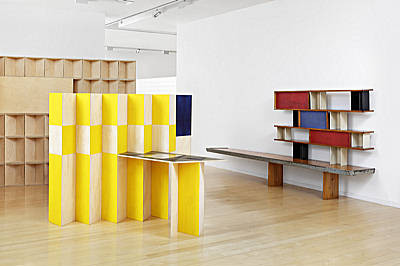 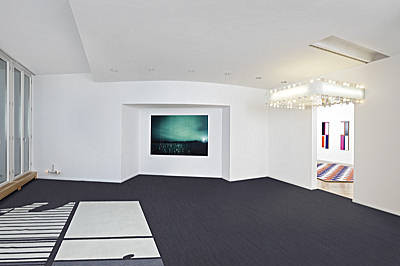 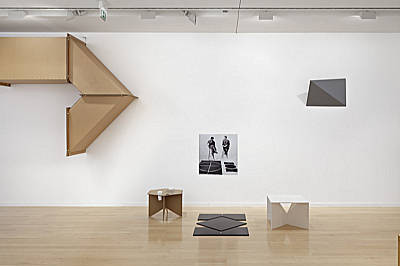 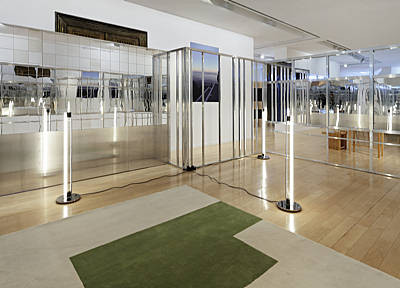 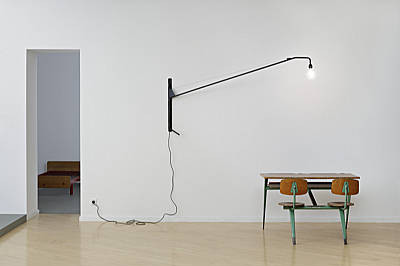 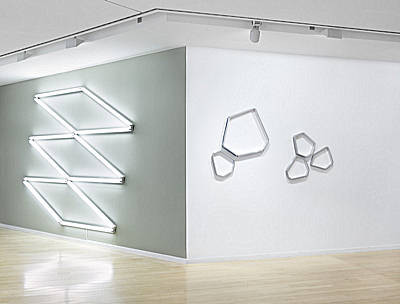 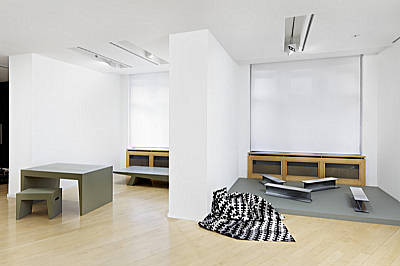 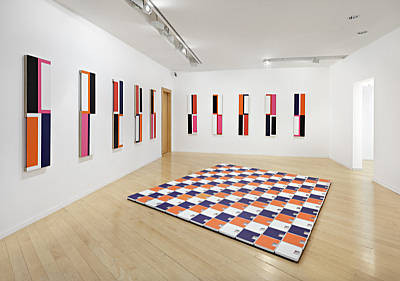 Over the last ten years, the Daimler Art Collection has developed a focal point in the field of constructive, conceptual and minimalistic tendencies from the 1920s to the present day. A particular interest was taken here in artists who have worked on the borders between free and applied disciplines. ‘Minimalism and Applied I’, 2007, introduced fine artists who work within the transition to architecture, product and graphic design. In contrast with this, the second part of the series focuses on a dialogue between outstanding early exponents of architecture and furniture design with international contemporary art. The artists take up formal elements of design and architecture classics with site-specific installations, sculptures, pictorial objects and Readymades, but above all enter into a discussion with these linked radical approaches and democratic ideals.
This exhibition centres on new acquisitions by international contemporary artists whose work examines the transitional spaces between art, design and architecture. Gail Hastings built her three-dimensional ‘thought space’ for a library building that was designed by the Australian architect Griffin in 1911 but was never built. Albert Weis’ Cabinet und Martin Boyce’ sculptures both reference the shared construction aesthetic of Jean Prouvé and Eileen Gray’s arc hitecture designs. The sculptures by Rupert Norfolk and George Henry Longly both combine industrial design with minimalist art. Back in the 1960s, Charlotte Posenenske pioneered the same kind of radical democratic approaches to art and design exemplified by Ferdinand Kramer and Charlotte Perriand: an authentic artistic language expressed in minimalist, participatory art objects. Philippe Parreno combines filmic, pictorial and applied aesthetics to create politically charged spatial situations.
The ‘Minimalism and Applied II’ exhibition is intended as a series of arrangements of art and design objects ‘in dialogue’.

In her art, Gail Hastings addresses the theories of Minimal Art. A new aspect of this artistic direction was to draw the viewer in to take responsibility and to participate in the perception of art. From this starting point, Hastings' works create spaces which seek to involve people as physical, intellectual and aesthetically competent beings. Two furniture classics by Charlotte Perriand have entered into a physical dialogue with Gail Hastings' 'Sculptural Situation'. Perriand (1903-1999), one of the 20th century's most innovative interior designers and furniture designers worked on perfecting a reduced formal vocabulary aesthetically and functionally, but throughout her life linked these efforts with an ambition to enhance in a new and radical way the quality of the social conditions under which people live together.

Charlotte Posenenske's lean sculptural oeuvre, developed between 1966 and 1968, stands out succinctly against the - horizon of the sixties avant-garde scene in Germany: firstly because of its quality - the power and logic with which it unfolds - and then again because of the decisiveness with which it was brought to a close. For our 'Minimalism and Applied II' exhibition we have choosen three work types by Posenenske: the Diagonale Faltung (Diagonal Folding) made gray sprayed aluminum from 1966, examples of the Vierkantrohre der Serie DW, 1967, (Square tubes series DW) made of cardboard as well the architecture related reconstruction of her Raumteiler (Space divider) from 1967.
Ferdinand Kramer was one of the initiators of the 'New Frankfurt' in the 1920s. This was the most significant example of a socially oriented architectural Modernism for the working classes, realized as a temporal and intellectual parallel with the model homes on the Weissenhof estate in Stuttgart. In retrospect, it is possible to rediscover Kramer as an outstanding representative of minimalist architectural and design practice. He always developed his designs by analysing function and use, always meeting the highest aesthetic demands, whether for a door handle or a large-scale ensemble of buildings. The Posenenske and Kramer couples used to meet frequently in the 1960s for conversation and joint excursions, which meant that Charlotte Posenenske was able to get to know items such as Kramer's folding furniture or corrugated cardboard table from close to, in friendly proximity.

Martin Boyce constantly recombines his sculptural alphabet to form new constellations, shifts and spatial articulations, like an anagram grouping the letters of an opening sentence to form new sentences on the border between sense and nonsense: tree structures and room dividers consisting of structurally fragmented lines and areas; pieces of furniture that reveal their sheer functionality through radically reduced iron structures; diagonally distorted iron garbage containers telling of the cyclical disposal and return of utopian designs. Boyce was able to rediscover the convergence of historical and modern forms in transitional areas from free to applied art in the architecture and furniture designs of Jean Prouvé, his work forms the second foundational module for Boyce beside photographs of four 'Concrete Trees' created in 1925 by the brothers Joel and Jan Martel.

Longly's sculptural work is concerned with the presentation of materials and shapes, and with atmospheric factors in venues devoted to art, shining a spotlight on these venues' existing structures, proportions and functions in a specific context and on what these mean for the mechanics of an exhibition. The light sculpture Lighting Proposal #4 addresses the viewer's mood and the way he or she experiences the space, and the floor sculpture Culturally Conceived in Industrial Terms (after Memphis), 2008, translates the functional aesthetic of Jean Prouvé's designs into an abstract configuration.
Rupert Norfolk's work can in particular be identified with the transgressive energy of moves from the real to the abstract, then back from the abstract to the real. Daimler Art Collection acquired two typical floor sculptures by Norfolk, which exhibit alternating qualities of appearance: metallic hardness against the soft fall of fabric, standard technical proportions against folds falling unregulated.
Dom Hans van der Laan was a Dutch architect, architecture theorist and priest whose designs were based on his own minimalist system of proportions. Laan gave his large building ensembles - the religious community complex in Vaals in the Netherlands (1956-68) and the religious community in Tomelilla in Sweden (1986-91) - furnishings with a characteristically minimalist design.

Jacob Dahlgren makes collecting into a principle: he takes patterns and basic graphic elements that he comes across in everyday life as decorum or objects then photographs and categorizes them, thus generating an archive linking different manifestations of similar structures. Often his spatial sculptures challenge observers to intervene actively with the object, as the installation Heaven is a Place on Earth demonstrates concretely: the piece consists of a variable number of bathroom scales positioned on the floor in a square or rectangular basic arrangement that challenge viewers to enter the area.
Sylvan Lionni realizes his painting using a kind of mimetic ready-made method. The artist focuses upon the graphic and semantic surfaces of his immediate environment: lottery, baseball, supermarket, stickers, wallpaper, carpets, street signs and everyday symbols. The motifs, in this case 'solar panel' graphics, are fed into the computer and altered, in the next step, they are transferred onto a finely structured surface with uncountable layers of paint in the slow tempo of the Old Masters.
Philippe Parreno's work unites aspects of art, film, theatre and design. He creates transitional spaces of temporal, culturally and aesthetically defined commonality. In 2006, Parreno designed his Marquées series - functional indoor or outdoor light sculptures that look like early cinematic fittings. Speaking to the Penguins, 2007, a colored infrared photograph shows Parreno delivering a two-hour lecture to a colony of Penguins on a beach in Patagonia. 6:00 P.M., 2001, represents a projection of a field of light, interrupted by a few cast shadows, onto a carpet. Parreno often works within constructed realities, which he interprets as and transferres into dreamlike, virtual worlds, leading our experience beyond the boundaries of phantasmagorical and true life.

Since the late 1990s, Albert Weis has been making his mark with architecture-related room installations and also sculpted, drawn and photographic pieces that analyse the complexity of urban spaces and the way we orientate ourselves in these visually. Since then, the practice of visual research with a camera in Los Angeles, New York or Berlin has been accompanied by an intensive exploration of the most important architects and designers in the early 20th century, and in particular Jean Prouvé, Eileen Gray and Le Corbusier. Albert Weis is represented by a representative group of more recent work in the 'Minimalism and Applied II' exhibition. His Cabinet, 2005, creates a space within a space; the folders series consists of photographs and folded drawings; the new flexions series uses aluminium profiles bent to form crystalline structures with proportions based on Le Corbusier's Modulor.
Eileen Gray (1878 - 1976, Ireland) was one of the 20th century' major product and interior designers. Her vision of creating ensembles of nature, building and an architectural ground plan with fitted and single items of furniture saw its first groundbreaking result with her E.1027 house, 1925-29, built on the French Riviera. It visualizes her ethos of a unity of landscape and cultural design, practical and versatile in use, with enormously refined detail in the choice of materials and finish.
Sarah Browne's work uses 'economies' as the dominant metaphor for social and political relationships. She investigates the influence of macrostructures in enclosed social units - forces that are determined by the nature of the social unit, but are also influenced by individual goals, desires and feelings. Her artistic techniques and materials reference a milieu of homeliness, housework and personal traces. Another focus of Sarah Browne's work is her interest in classic minimalism - for instance, in the disparities in the machine-produced object and its status as a 'useless' object of non-definable value. Originally, the artist was interested in the designs by Eileen Gray as a marginalised piece of 20th century history, and became intrigued by the sensual, emotional and user-oriented modernism cultivated by Gray.