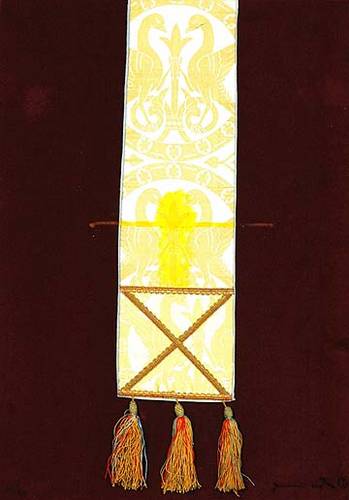 Collage-Décollage is the title of the exhibition of works by the artists Erró, Anton Henning, Jiri Kolar, Hermann Nitsch, Mimmo Rotella, Tom Sachs and Hans Staudacher reflecting the multifarious forms used in these two artistic techniques.
The dissolution of the surface area in these two methods is produced by creative processes. In collages this is done by construction, the addition of greatly diverse materials and objects, whereas décollage involves destruction, a radical change of the initial state of an artwork through tearing, cutting or burning. Both techniques blend creativity and experimental development processes in the finished work of art. This gives rise to unlimited associations, intensifying the narrative element of the works.
Erró`s collages are inseparably linked to the concept of pop art, which confronts a world of clichés, illusions and prejudices with familiar, brutal fragments of reality from the mass media.
Jiri Kolár recognised the borders dovetailing verbal and visual language and transported his visual poetry accordingly into his collages using all sorts of media.Two tendencies define his works, circular and spherical forms alongside dynamic sequences of time and movement.
Hermann Nitsch’s exhibited collages manifest new creative impulses. While the fundamental theme continues to allude to Catholicism, the sovereignty of the priest, his expression of it has changed as regards the materials he uses. Nitsch appliqués parts of liturgical vestments onto monochrome velvet fabrics.
Mimmo Rotella uses décollage to convey conceptual impulses. Here a torn film poster, a part of the urban environment, becomes a source of creativity and a work of art through an act of visual processing, of deliberate new invention. In contrast, Tom Sachs's works refer to our manipulated perception of commercial images and the power of mass marketing. He likewise combines available materials with functional or useless objects, which are thus given a new function.
Besides the characteristic letterism and influence of abstract expressionism, Hans Staudacher also integrates objets trouvés in his pictures, thus placing them in a new context. As he says himself, these are a combination of writing, colour, sign, coincidence, motion and superabundance.