Permanent Daylight, and The Grandchildren of Mao 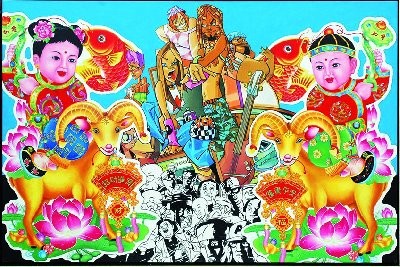 15 May – 19 June 2008
Introduction: Lóránd Hegyi, Musée d ́Art Moderne de Saint Etienne
A catalogue is being published with the exhibition.

In his latest pictures Erró has remained true both to his characteristic compositional principles and to his appropriate choice of subject. The Icelandic artist is a “sampler” of modern art history and of a simply inconceivable range of genres from everyday life: comics, advertising posters, trashy paperbacks, erotic magazines ... Naturally, he interweaves various iconographic levels together. For instance, an Asian karaoke singer pushes herself to the front of the Arnolfini picture, or rather, Erró’s pop paraphrase of Jan van Eyck’s portrait of prestige. High becomes low. The artist pulls comic masks over the faces of the Flemish couple as in a Walt Disney cartoon. Mickey Mouse peeps out from behind the curtain in the convex mirror in the background. Erró helps himself from the history of art and its iconic image; he is, as it were, standing before a lavish buffet where he piles his plate up with the ingredients of art.
Erró painted a monumental work in 1964 with the title Foodscape, a bewildering landscape abounding with all kinds of food. The observer is practically overwhelmed by the flood of gastronomic stimuli, paralysed by the excess of choice. Erró went to the USA for the first time in 1963 and got to know the American way of life: technological progress and fanatical consumerism in the grand style. Above all, the abundant options of fast food caused the artist to bring social-critical elements into his painting and to inundate the observer with the cacophony of consumer goods. During the sixties, Erró’s pictures are dominated in technique and aesthetics by the all-over style; he distributes the paint in small-scale portions over the total area of the picture as if someone were slicing open a bursting fish net right in front of our eyes, showers of fish pouring out. Meanwhile, his current paintings are marked by a structure related to cartoon images; a few monumental figures in dynamic movement, which threaten to explode the frame of the cartoon square, to break out of it.
The surface consistency of Erró’s acrylic pictures is as smooth as that of comics; the artist avoids a material and pastose palpability and inexact application of paint in favour of the personal touch.
Everything is treated the same, as in printing, anonymous, in order to shift the subject and content into the centre of things. This shows the artist setting himself off quite deliberately from the generation of abstract expressionism, where the free spirit and the self-referencing of the material were given pre-eminent importance. We might recall for instance Jackson Pollock’s clumpy and lacquer-type drip paintings, icons of action painting. In 1967, Erró painted a monumental picture alluding to the heroes of abstract art. In The Background of Pollock, Erró shows the action painter in the forefront in a thoughtful pose with a cigarette, emerging from the all-over composition of greatly diverse motifs and images, among them numerous appropriations from classical modern art – Mondrian’s neo-plasticist pictures, a self-portrait by Vincent van Gogh, Picasso’s Les Desmoiselles d’Avignon. Picasso was the supreme “scratching post” for Pollock: simultaneously model and rival. Erró’s all-over work is always determined iconographically, as mediator of the picture flood, as wave of images, shuffled in bold array. The artist does not differentiate between high art and everyday life. This gives him affinity to several pop artists, for instance Roy Lichtenstein, who in one of his pictures combined a Picasso head with consumer articles. Lichtenstein achieves this uniform effect through the equally uniform painterly treatment, similar to silk screen technique. With Erró, it is the anonymous painting technique, reminiscent of comic printing.
Since the 1970s, more and more motifs crop up from East Asian cultural regions. Erró became involved with Communism and was interested in the teachings of Mao. The artist formulates this seemingly conflict-free, idyllic world in his paintings: radiant faces, a triumphant Mao, who travels the whole world. Despite the surface brilliance, a pinch of biting irony laces the pictures, highlighting the social-critical man Erró – as in his early pictures with collage character from the 1950s and 1960s. Here people mutate into machines – an apocalyptic scenario of humanity. The Paris group Figuration Narrative, to which we may count Adami and Monory Erró, positioned itself as a social movement in post-war painting, in contrast to affirmative pop art. Instead of the stereotypes of consumer-oriented affluence – Campbell’s Soup, Coca Cola and Marilyn Monroe – in the wake of materialism we have the threat of environmental destruction and loss of individuality.
www.hilger.at