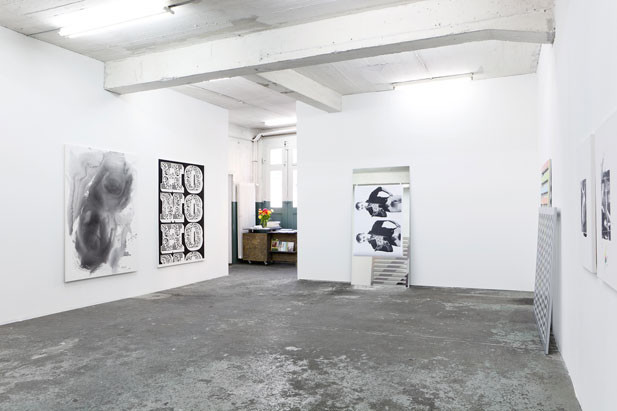 We are very pleased to announce the second solo exhibition of Megan Francis Sullivan (*1975 Stamford, USA, lives in Berlin) at Freymond-Guth Fine Arts.
Underlying structures of visual representation form a central theme in the work of Sullivan especially in her recent focus on images of men. Doing so, the artist applies various medias and styles in the tension of formalism and desire. In the exhibition „Slow“ (2009) at Freymond-Guth, the artist presented a series of gouache paintings, based on Kylie Minogue‘s videoclip of the same name. In the video, men in swimsuits pose around the singer from an aerial view. Sullivan staged a photoshoot and made a series of paintings based on the images, arranged in formalistic manner inspired by color studies of Sophie Taueber-Arp and Ellsworth Kelly, anonymizing the objects of study.
In the exhibition „Dirty Mirrors,” the artist presents a series of works - paintings, transfer on canvas and sculptures - that continue to explore didactics of form and repetition, this time focusing on the German gay magazine „Boys, Kerle, Männer.” This magazine was first published in 1972, shortly after homosexuality in Germany became legalized following the reform of „Act 175.”
For the transfers for instance, Sullivan uses photocopied images from the magazines applied onto canvases with painted interventions. The images show naked men staged in masculine connoted poses and attributes: on horseback, with a football, in front of a library. But scenery and pose as well as the technical simplicity of these images reveal a moment of shy orientation, where a visual self-conception mirrors classical and historical prototypes that are imitated and reenacted.
Sullivan adopts a supposed role of difference to approach codes and rhetorics of a specific subcultural environment of the early 1970s. But through the fact of this conceptual detour Sullivan establishes a relation of a subjective investigation of the base of artistic (re-) production and mimesis on one hand with the conditions of appropriations of cultural codes on the other. The publishing of „Boys, Kerle, Männer“ can be located in the transition point in a process of visuality, from repressed subculture to becoming an established cultural „norm“ associated with homoerotics as part of every day life.
In the process of incorporating these images into artwork, the motives are abstracted through accentuation of details, additional coloring or geometrical playfulness. Formal-abstract elements can be understood as an attitude between analysis and fascination. Much more it can also be read as a metaphor for processes of formalization of cultural conventions. Sullivan‘s method of displaying and quoting seems to reflect how socio-political categories- that are factually unstable because they are subject to historic transformations- are dependent on such acts of repetitions of cultural staging to be recognized as an imaginary ideal. Cultural discourses only become „materialized“ through constant mimesis and the mirroring of inscriptions.
The sculptures that formally resemble frames can be thus understood to reflect an idea of formalization processes. The repetition, stacking and layering of plain, color and sculptural body not only show proximity to methods of concentration and visual juxtaposition but also irritation and obstruction of the view. But it is precisely in this skilled maneuver with the control of approaches; repetition, mirroring, blurring and dissolving of categories that reveal an oblique potentiality.