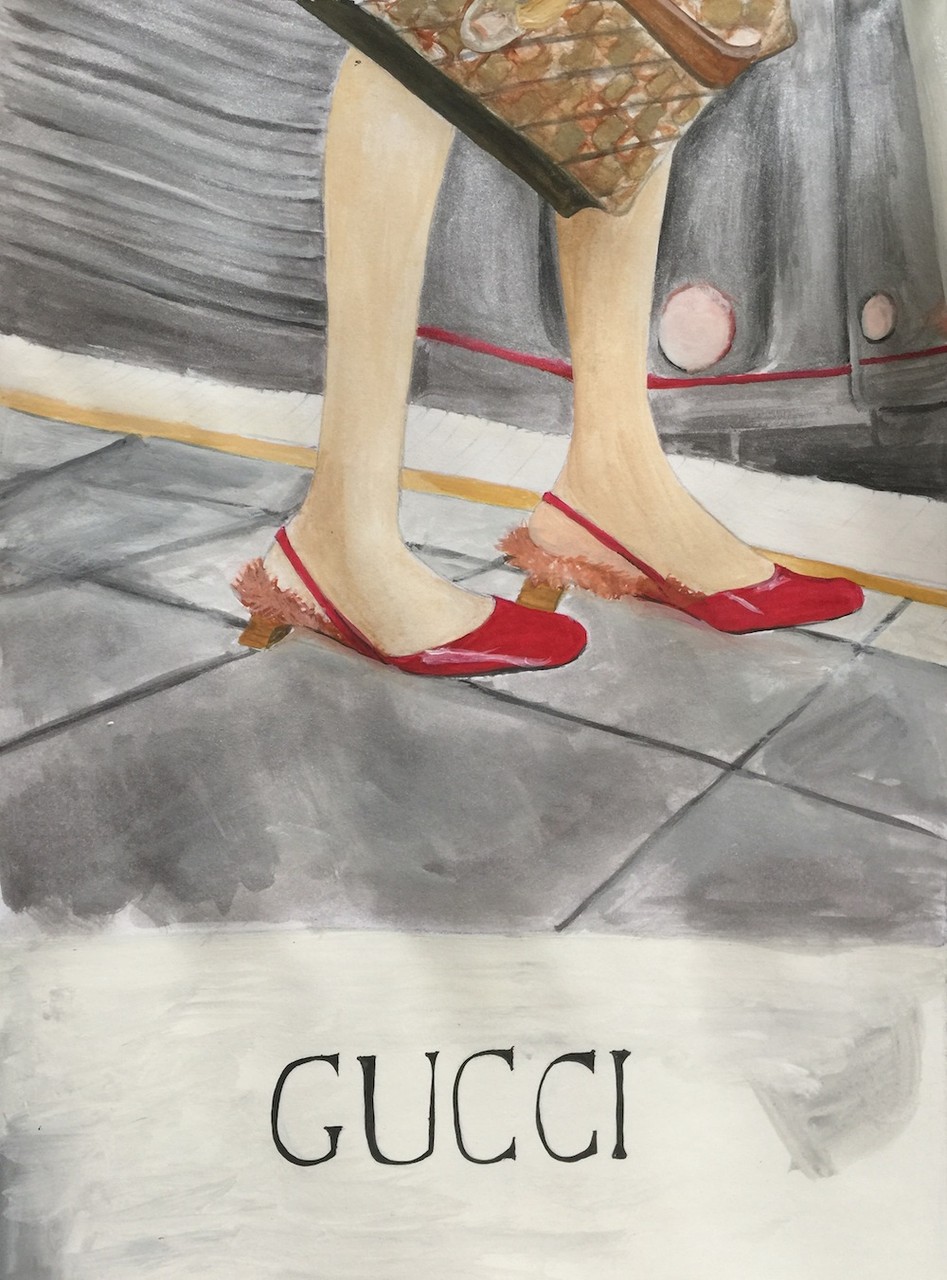 Juliette Blightman ( born 1980 in Farnham, UK, lives in Berlin). Juliette Blightman records her observations from daily life through photography, drawing, and painting, creating snapshots that continually fuel an ever-growing image archive. In capturing these moments, she is less interested in the exceptional and more in the incidental and transient. Blightman has taken one of the motifs from her image collection, a small gouache, and transformed it into a poster-size edition for the GAK. It presents a close-up of a female figure on the subway platform in New York, sporting Gucci shoes and a Gucci handbag. The interplay between the image and the subtitle GUCCI suggests an ad for the luxury label, contravened by the painterly quality. Notions of exclusivity and the perception of value – wearing Gucci, but riding the subway; the small original gouache versus the large-format but printed poster – tie in with questions concerning the relationship between originals and reproduction. Gucci is actually one of the world’s most counterfeited labels, which the title – A bird in hand, is worth two in the bush – wittily underscores.

Kasia Fudakowski (born 1985 in London, lives in Berlin). Kasia Fudakowski’s works often assume a position between physicality and abstraction, with an affinity for the absurd and humorous. The same applies to her Jahresgabe. The piece comprises fifteen ceramic life-size eyelids to which the artist has glued fake eyelashes and grouped them together in an absurdist Dadaesque eyelid mobile. Fudakowski uses the title, Blinking Bonkers, to create a humorous connection with the shape of the eyelid, referencing the eye’s ability to blink but also the notion of craziness or insanity. The British idiom “to be on the blink” also means that something is broken or not working quite right. These various interpretations of the title co.

Christian Haake ( born 1969 in Bremerhaven, lives in Bremen). The Jahresgabe from Christian Haake includes five original pieces in which the artist elaborates his own unique style of painting. He uses industrial production techniques with which he creates formally reductive but carefully detailed, multi-layered drawings. Urban and industrial shapes appear on various levels, seemingly invoking architectural fragments. Often combinations of memory and imagination form the basis for Christian Haake’s works. He explains that the idea behind the five versions of his Jahresgabe is a train ride during which the landscapes quickly pass by in a blur. However, despite their movement, the viewer still retains a few abstract shapes. While the real world is suggested in the works, each differing in subject and technique, that world is not formulated as a clear representation. In connecting with the viewer's everyday life, the works still maintain a narrative open-endedness.

Emese Kazár ( born 1974 in Budapest, Hungary, lives in Bremen). Emese Kazár’s Jahresgabe consists of five original pieces, sections of a large oil painting depicting a female figure that the artist separated into distinct individual images afterwards. Each work represents Kazár’s characteristic dark palette with non-transparent paint layers. Two of the canvases make a clear reference to their original motif, displaying a head or a hand. Others, because of their isolation, completely dissolve the underlying figure into abstraction. One can hardly detect that the blue shadow at the top of one painting excerpt depicts the female breast, that a dark bulge constitutes the navel, or in another, the female crotch. To that end, the original works from Magdalena explore possibilities for depicting the human body and at the same time stage an interplay between abstraction and figuration.

Marie Lund ( born 1976 in Copenhagen, lives in London and Paris). Marie Lund’s oeuvre is characterized by a multifaceted approach to the discipline of sculpture. She often works with found objects whose back-story is embedded in the material. The artist transforms these into her own shapes by adding or subtracting, accentuating marks or blurring them, dissolving structures or revealing new qualities.
Her Jahresgabe for GAK, entitled Hand Full, comprises two bronze casts of the artist’s own pants pockets. In a process of reversal, the intimate interior is turned inside out, substance being transformed into emptiness and emptiness into substance. Coins, a lighter, seams and fabric wrinkles now only appear as imprints – a handful of the ephemeral everyday, preserved in precious bronze.

Michael Schmid ( born 1981 in Ulm, lives in Bremen). In his photographs, Michael Schmid approaches the motifs with the greatest precision and presents them bin a reductive formal language. Everyday experiences or objects serve as the starting point for his works, which are isolated and unambiguously placed in the centre of the image space. Schmid’s work focuses on the essential and pursues subtle paradoxes of our reality without any subsequent retouching of these in the photographs.
Schmid’s Jahresgabe directly relates to the GAK. Not only was it created during one of the GAK’s opening nights, it also portrays the GAK’s striking façade displaying the large-scale mural by Lawrence Weiner. Opening was shot from the other side of the Weser River, exactly opposite the GAK. In the twilight, Weiner’s work reflects in the water. People appear backlit in windows. Schmid’s view of the situation in the black and white print is both distanced and tense, presenting the opposition of a static element (the building) and the atmosphere (the reflection on the river and the opening night activity inside).

Max Schaffer ( born 1985 in Santiago de Chile, lives in Berlin). The beginning was in 1978 when Richard Artschwager created a Jahresgabe from his Blips series for the Hamburger Kunstverein. In the 1990s, some of the series’ certificates landed in the trash, discovered by the artist Till Krause and then, in 2016, passed on to Max Schaffer. Schaffer was especially interested in the thin tissue paper laid between the sheets as protection. Since 1978, the tissue paper had absorbed the ink, reproducing the printed characters of the originals and resulting in mirror-inverted subtle imprints of words like “Artschwager” or “Zertifikat”.
Responding to Till Krause’s initiative and taking literally the idea behind the Jahresgabe, Schaffer framed the tissue paper pieces and presented them as a gift to the GAK. This process will be continued by the GAK giving them to five interested parties without charging a price. In return, the new owners must sign a contract declaring that after one year, they will altruistically pass on the works and notify the GAK of the works’ new locations. The new owners will be obliged to do the same. And the next ones... This way, the trajectory of the works will be retraceable like “blips”.

Sex (Branka Colic, Anneli Käsmayr, Michael Rieken, collaboration since 2005 ). The Jahresgabe from the music and art group SEX comprises piano arrangements in traditional design, available at the customary price of sheet music. At first glance, the viewers think they are holding a classical composition. However, upon closer inspection, it becomes clear that many of the notes are unplayable. In fact, the score is of house music tracks self-produced by SEX, which the artists then had transposed by a digital audio sequencing programme into classical musical notation. This automated translation of electronic sounds into notes creates absurd figures that negate the implied purpose of the piano reduction. Thus, the Jahresgabe positions itself between categories of (claimed but not fulfilled) functionality and artistic statement.
www.gak-bremen.de