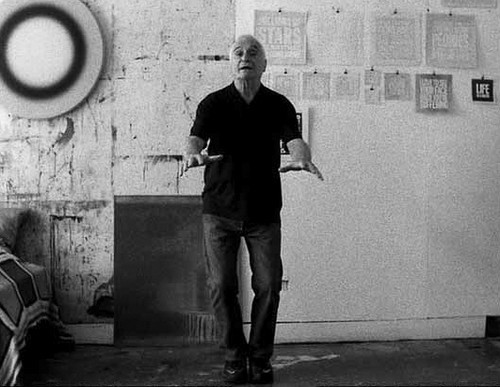 Gavin Brown’s enterprise is pleased to present JG Reads, a new film by Rirkrit Tiravanija. During the summer of 2008 Tiravanija installed himself and a small film crew to produce a film document of John Giorno’s poems, memoirs, and music works.
JG Reads spans five decades of work, creating an essential portrait of one of New York’s seminal bohemian figures and, by extension, a record of a New York that now exists only as an idea – in the imagination of all those still willing to see it. Shot on location in the hallowed ground of Giorno Poetry Systems, with the indefatigable Bowery only a few feet away, JG Reads marks a pivotal moment in the history of this creative community. Where we go now is up to us.
John Giorno (b. 1936) is a poet, musician, and performance artist. Giorno came to prominence for his influential Dial-a-Poem project (1968) and for his collaborations with William S. Borroughs and especially Andy Warhol. He is the subject of Warhol’s first film, Sleep, (1963) a six-hour recording of Giorno sleeping. Giorno’s famous studio on the Bowery, known as The Bunker, was a center for experimentation among some of the most important artists of the postwar, including Robert Rauschenberg, Frank O’Hara, Roy Lichtenstein, Yvonne Rainer, and John Cage. Giorno has published numerous collections of poetry, music and spoken-word recordings.
Rirkrit Tiravanija (b. 1961) is among the world’s most influential contemporary artists. His solo exhibitions include “A Retrospective (tomorrow is another fine day)” (Serpentine Gallery, London; Musée d’Art Moderne de la Ville de Paris, Paris; Museum Boijmans Van Beuningen, Rotterdam, 2004-5); Hugo Boss Prize (Solomon R. Guggenheim Museum, New York, 2004); and the 48th Venice Biennale (Venice, 1999). Tiravanija lives and works in New York.
JG Reads was shot in black and white on 16mm film and runs 10 hours 6 minutes.
www.gavinbrown.biz