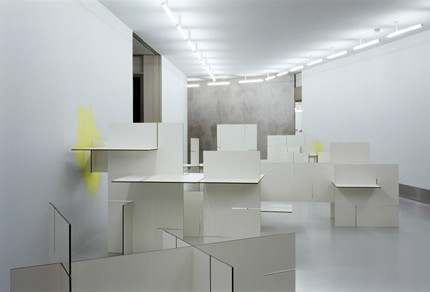 >o. T. [City IV]< is a project based on the interest in the city as a platform for different artistic practices that seek to question established concepts, to open new discussions, to explore unknown spaces, to uncover hidden strata. City planning and architecture are nowadays marked by two contradictory tendencies: on the one side, the process of globalisation is strongly reflected in the uniformity of contemporary urban landscape, while on the other, we witness the urge to protect each city’s own identity. The city’s specific historical heritage, together with its current social and political organisation, is the prerequisite that still gives specific character to it.

The social and the related architectural history as well as the contemporary urban development of Leipzig serve as an example of an organism which is in constant flux and change, where different tensions, ideologies and desires clash, producing new spaces for negotiations about its future.
>br> The invited artists have chosen Leipzig as a ground for their reflections on the given topic. In the works however, the individual depictions have charged concrete sites and places with metaphorical meaning that echoes in the title of the exhibition. It suggests at first glance the idea of a picture / a painting, insofar as paintings are very often titled in a way which is very open and allows various interpretations. The reason for such a choice is to be found in the rather emotional approach to the theme that prevails over detached scientific analysis.

During his first visit to Leipzig, the Dutch artist Matthijs de Bruijne asked a few inhabitants of different professions and backgrounds to show him places in their town they don’t like and avoid passing by. In most of the cases those are abandoned places or buildings bearing the heritage of failed social utopias. In his work “A Place I Dislike”, the artist combines the pictures of the spots taken in Leipzig with stories about similar places in the South-American metropolis of Buenos Aires. The basic structure of every political and ideological system is founded on the same principle and operates using the same tools everywhere, global capitalism being no exception. And in a cynical way it gives global character to social differentiations, fears, poverty, hatred.

A radically different approach towards urban civilization and technological development related to it is to be seen in the work of Ebru Özseçen. Her installation “City” is rather an aesthetic encounter with “mechanized humanity”. A cinema space is furnished with specially designed chairs. The projection presents relicts of 1960s and 1970s computers in museum storage. The processed image transforms them into a structure suggesting the futuristic vision of a city as depicted in Ridley Scott’s “Blade Runner”. Yet the artist’s fascination with high technologies goes alongside the awareness that technology could easily turn against human beings.

Tilo Schulz in collaboration with the author Sibylle Berg uses her novel “Sex 2” to investigate city life both as an architectonical construct which more often than not arises against any regulations, and as a node of different human destinies. By means of a sculptural installation combined with text, Schulz’s/Berg’s work unveils quite unpleasant sides of everyday life. The metropolis’ inhabitants are usually victims of sexual violation, neurosis, fears, crimes, alienation and loneliness.

Wolfgang Thaler’s project is entitled “Mep’yuk”. This is the name of an invented, fictitious place, consisting of pieces of genuinely existing public and office buildings located all around the world – Tokyo, Sofia, Mexico City, Leipzig, Tel Aviv, Vienna. Albeit of different origin, their function is the same and consequently so is their infrastructure. This strange place, non-existent on the map, could be crossed and even abandoned in one’s thought, but can never be completely got out of, insofar as it is our own reality, our creation, the reflection of our own utopias.
www.gfzk.de