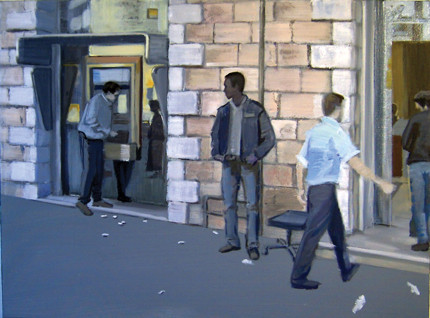 All the works on view illustrate a coming to terms with the city: with the inhabitants of the city, with experiences drawn from daily life and fleeting observations, with current mental and media-based images. The city, imagined today as an overlapping structure embodying political, economic, social and cultural factors, is reflected and interpreted through appropriation to the painterly medium - in such a way that clichés and stereotypes have just as important a part to play in the conception and perception of urban reality as do ideas that deviate from the mainstream.

For centuries there have been artists whose works took issue with urban reality, in various different ways – take the famous urban panoramas of Guardi or Canaletto in the 17th century, or the socially critical style of the first and second decades of the 20th century as seen in painters like Otto Dix and George Grosz, to mention just a few of the most notable examples.

Artists in former East Germany also dedicated themselves to the dawning or downfall (depending on their point of view) of new civic ideals – to life in the (socialist) community, or the alienation of the individual. Doris Ziegler can draw on her experience of times both before and after Reunification. Her works are classically constructed and melancholy in mood, deliberately incorporating references to history. They deal with transformations in the urban environment, in the physical and visual appearance of the city, but also take an interest in the transformation of human beings themselves. Since the 1990s alienation has undergone changes, moving from the political to the economic sphere. In the works of Verena Landau the definably urban transforms itself into something undefinable. The urban scenarios that she paints reproduce faceless locations which are just as interchangeable as the human actors of her pictures. The role that in the last resort falls to their lot – in the paintings, and also in terms of the social structure – is that of the supernumerary. The influence of the mass media, advertising, shopping – of a global consumer culture, in short – on the conception and perception of the city, and the social conflicts that result from this, are the themes with which Anna Meyer is concerned. Characters that seem aimless and disoriented, and outsider groups that have been thrown to the periphery of the social network, populate the overgrown urban jungles of her paintings. In the same way, Johanna Kandl is interested in the clash of different cultures, points of view and also economies – and she does this by deliberately generating collisions and contradictions between the two levels of image and text. For both artists, the city presents itself as a conglomerate of different spheres, influences and mechanisms (or power structures). Katharina Immekus and Orsolya B. Larsen both find a point of departure in the standardised image of the city. While Imekus focuses on the petty bourgeois aspect of German city centres and suburbs, Larsen investigates the stereotypical promises of socialism – for instance, in the interpretation she gives to pictures taken from an atlas of the Seventies or in the way she strategically seeks out motifs in present-day cities that testify to the brittleness of those past ideals, or their utopian content. By isolating their motifs from the environment given to them, and using pictorial means to convey a certain thematic accentuation and emphasis, both Immekus and Larsen give us a reflection of that longing for a perfect world – whether expressed in bourgeois nostalgia or in a would-be total conception of society – that really lies behind their pictures. Rafal Bujnowski, this year’s winner of the Europe’s Future Prize for Art, will be putting in a contribution to the new building work going on at Leipzig’s Gallery of Contemporary Art – thus providing a deliberate commentary on the Gallery’s urban surroundings.
www.gfzk.de