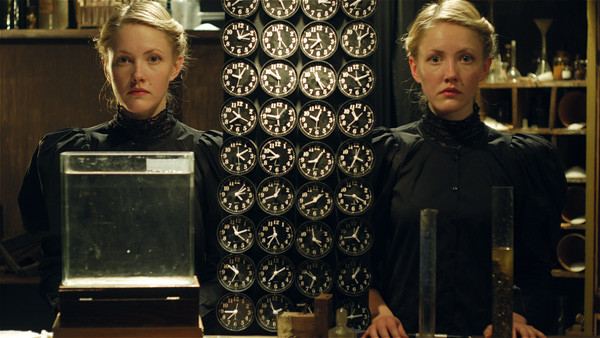 During the past three years Reynold Reynolds worked on "The Secrets Trilogy", a cycle exploring the imperceptible conditions that frame life.

This will be the first time "The Secrets Trilogy" is brought together and can be viewed as three installations.
In his most recent work Reynolds deconstructs film as the perfect synthesis of art and technology. "Six Easy Pieces" (2010) the final work of the trilogy, will premiere at Labor Berlin as a 3-channel installation. The work is based on the book "Six Easy Pieces: Essentials of Physics explained by its most brilliant teacher" by Richard P. Feynman. It refers to an age when artists and scientists had similar concerns and were often the same person.
"Secret Machine" (2009) takes Eadweard Muybridge's photographic experiments as a starting point. The video reflects the radical change in our understanding of time and space developed in film as well as in photography's relationship to measurement, science, and the human body.
In "Secret Life" (2008) a woman is trapped in an apartment filled with plants. She moves at mechanical speed and her mind is a clock whose hands point to the events of her life like a tapestry of time.

Reynold Reynolds was born in 1966 in Alaska. In 2004 he was invited to Berlin by the American Academy and in 2009 he received Transmediale's Distinction Award.
www.hkw.de