Spirits and Objects...and How Non-Productive Love Is Sometimes Contained in Them... 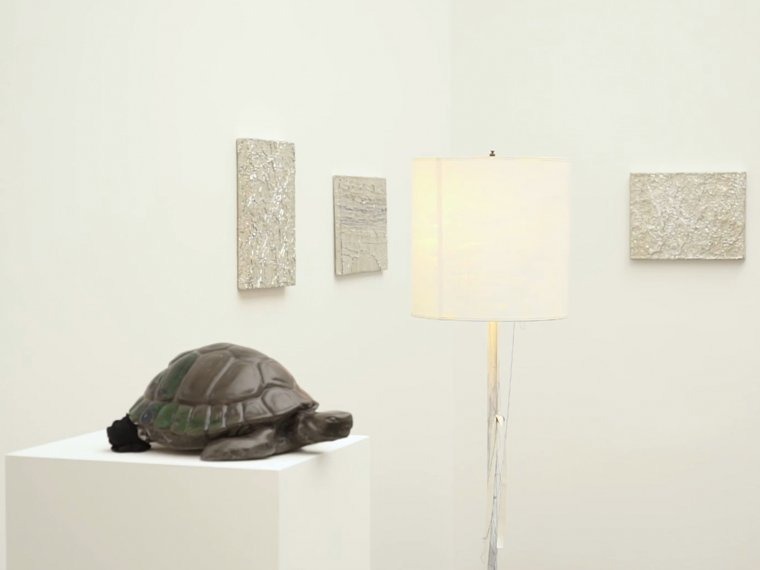 The Kunstverein für die Rheinlande und Westfalen, Düsseldorf is pleased to present Spirits and Objects... and How Non-Productive Love Is Sometimes Contained in Them..., the first comprehensive institutional solo exhibition by Josef Strau in Germany. The exhibition brings together objects and text production made between 1991 and 2020 as an attempt to create an autobiographical depot, as if these objects were simply the result of time or of durations of psychological states, such as fear and anxiety, and sometimes also of desire. The hermeneutics of the transcended temporality of these aging, slowly fading art objects craves the discovery of time itself as the tool of salvation from their object reality. Strau’s complex, nested retrospective vessel contains, in addition to everyday stories, a random selection of objects representing, among other things, tigers, temples, tears, fences, children’s letters, angels, icons, and cured turtles. The most recent work is a spider clock, The 13 Hour Cymbal Spiderclock that exhales the Dreams, which announces a new time beyond the usual twelve hours.

This metaphysical repository is a first attempt by the nomadic artist to not habitually produce every exhibition anew, but to confront his own production history instead. However with a small twist: In addition to his earlier texts and works, this empirical-existential retrospective is accompanied by commentary, by philosophical-theological echoes from the present – by the artist himself as well as by other invited artists.

Spirits and Objects, much like earlier shows by Josef Strau, comprises several exhibitions at once. Its center is formed by three large-scale, walk-in, funnel-like cardboard cinemas, whose floor plans correspond to the letters R, V, and E. Inside are film adaptations of short passages of text written years ago by Strau, which his New York friends Keren Cytter, Bernadette Van-Huy, and Enzo Shalom produced on the occasion of the exhibition. On the wall behind the cardboard cinemas a selection of sixty text posters from previous exhibitions form a retrospective of sorts of Strau’s endless and meandering styles of writing. At certain points, the band of posters is covered by photographs and other works or surrounded by unpacked objects that refer to them, but can also be taken as independent objects.

The exhibition is accompanied by a series of readings, lectures, and guided tours. A new book published by Verlag der Buchhandlung Walther König is planned for winter 2020, collating every text poster presented in the show into a single reader.
www.kunstverein-duesseldorf.de