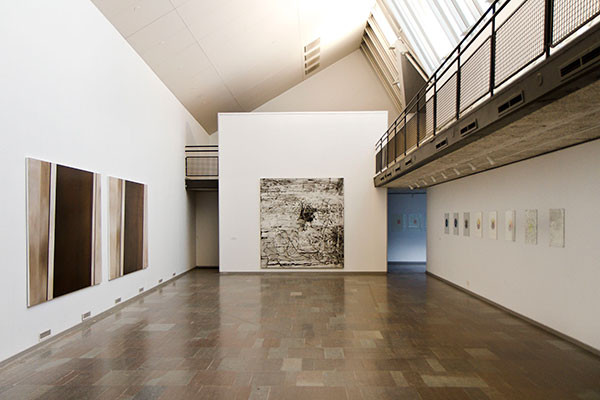 We are very glad to be able to show Channelled, a visually rich and thought-provoking group exhibition based on the thinking of visionary Swedish artist Hilma af Klint (1862–1944). The exhibition features works by her and by contemporary artists Carolus Enckell (Finland), Olav Christopher Jenssen (Norway/Germany), Joachim Koester (Denmark/US), Christine Ödlund (Sweden), Silja Rantanen (Finland), Nina Roos (Finland) and Emily Wardill (England).
The exhibition title refers to the significant concept of inspiration, which originally meant ‘breathing in’, something that is breathing through you, or that you are precisely ‘channelled’ by this something. Inspiration and its crucial importance to practitioners of both science and art have been intensively discussed at various times since the emergence of Romanticism in the 18th century.
In Hilma af Klint’s lifetime this discussion was particularly active within Theosophy and Anthroposophy, two schools of thought that attempted a synthesis of the known and the unknown, the conscious and the unconscious. Today af Klint is mostly known for her esoteric painting, which can be described as systemic visualisations of complex philosophical and spiritual notions. Her paintings were always preceded by notes, of which those from 1905–1916 have been characterised as inspired from outside (i.e. dictated by spirits, The High Ones) and the later ones as her own spiritualist research.
The curator of the exhibition, Gertrud Sandqvist, has spent several years studying around 150 occult diaries in which af Klint documented her method and process in great detail. They also reveal her relations to the authorities of the time – not least the founder of Anthroposophy, Rudolf Steiner – and her struggle to maintain intellectual independence. The exhibition includes a hitherto unknown
series of drawings and watercolours from 1917, a kind of spiritual notes or sketches.
Hilma af Klint, previously shown at Lunds konsthall in 1990 and 2007, has since the 1980s been recognised as one of the pioneers of abstract art, but her approach can also be traced in contemporary art. Channelled highlights points of connection between af Klint and some leading artists today. Several of their works have been produced specifically for this exhibition, while others have been rarely exhibited, if at all. All these works relate to the theme of inspiration.
We warmly thank the participating artists, and of course the initiator and curator of the exhibition, Gertrud Sandqvist. We also thank the Hilma af Klint Foundation in Järna, the other lenders and the galleries – Carlier | Gebauer in Berlin, Galerie Forsblom in Helsingfors, Galleri Riis in Stockholm – that have kindly helped us to realise Channelled.
www.lundskonsthall.se