The More I Draw 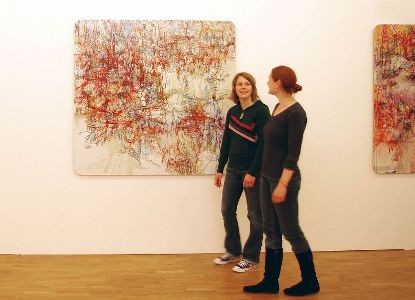 © Contantin Luser
Schallmauers Winterreise, 2009
THE MORE I DRAW
Drawing as a Concept for the World

On over 1,400 m2 space our overview exhibition The More I Draw in the Museum of Contemporary Art Siegen highlights the tendencies in contemporary art drawing since the 1960s, focusing on the serial, narrative, descriptive, and mythologizing forms.

The exhibition showcases 41 international artists and aims at revealing the definitive role drawing plays in modern art, a role that was conceived by Conceptual Art, which discovered drawing as an original art medium and to a large extent helped to revaluate it through its conceptual traits.

Well-known artists‘ approaches are shown in an historical retrospective, such as by Joseph Beuys, Frédéric Bruly Bouabré or Cy Twombly, but also other important illustrators of the following generation, for example Anna Oppermann or Tomas Schmit, among others. A focal point of the exhibition is the actual practice of drawing, visualized by extensive groupings of works and drawing installations by contemporary artists such as Jorinde Voigt, Dan Perjovschi, or Alexander Roob, artists who have expanded drawing as an art form experimentally and through performance.

An extensive catalogue will be published at the beginning of September. The catalogue will include an introductory essay by Eva Schmidt and an article by Michel Sauer, next to expositions on the artists and a commentated index by Jan-Philipp Fruehsorge on exhibitions, blogs, publications, etc. that are dedicated to drawing as a medium. Publisher: DuMont Buchverlag, Cologne. Price in the museum book shop: 29 € / estimated retailer price 34.95 €.

The Museum of Contemporary Art Siegen is a culture partner of the WDR.
www.mgk-siegen.de