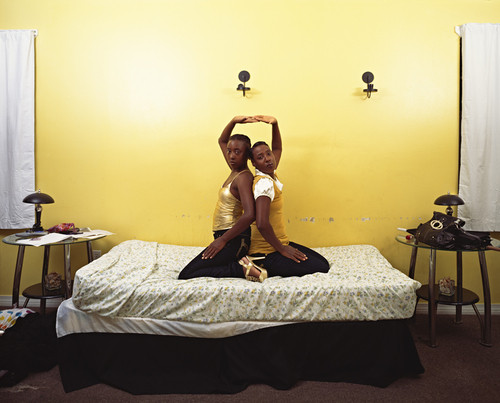 This year, MoMA's annual New Photography series expands to feature the work of six artists, with the aim of capturing the diversity and international scope of contemporary photographic work. New Photography 2011: Zhang Dali, Moyra Davey, George Georgiou, Deana Lawson, Doug Rickard, Viviane Sassen includes the work of Dali (China), who uses original source materials, including Chinese archives, books, and periodicals, to trace the lineage of propaganda made during Mao Tse Tung’s Great Leap Forward and Cultural Revolution; Davey (Canada), whose mailed-photograph grids feature the stamps, postmarks, and return addresses that have accreted on each photograph—analog elements that are particularly unique in these digital times; Georgiou (England), who looks at modern-day Turkey as it seeks to hold on to its traditions and landscape amid the oncoming wave of Westernization and development; Lawson (U.S.), whose work showcases the African American experience, with a particular emphasis on the human figure and form, in powerfully intimate portraits of people from all walks of life; Rickard (U.S.), whose photographs document the blurred faces of people and crumbling American cities as captured by the Google Streetview lens, and explore issues of poverty, race, and privacy; and Sassen (The Netherlands), who incorporates images of the people and places of the African continent in an attempt to recapture her surreal dreams and memories of growing up in Kenya. The artists in New Photography 2011 approach image-making from very different perspectives, making for a truly dynamic combination.
www.moma.org