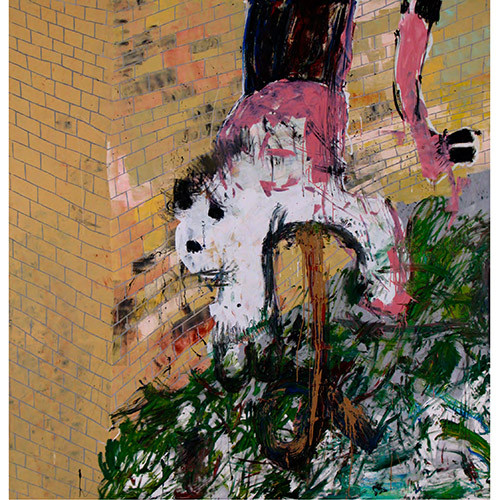 Patrick Painter, Inc. is pleased to present Andrew Piedilato, a solo exhibition featuring five large canvases by the Brooklyn-based painter. Through this body of work, Piedilato resolves issues of space, color, and juxtaposition.

The brick wall present in much of the artist’s work illustrates the artist’s struggle with blank space on the canvas, both literally and figuratively. With their energetic combinations of texture, color, and motif, each painting functions as an entire world within itself. On every canvas, a battle rages in which each element explosively vies for dominance in the painterly spectacle.

In some compositions, such as Notebook Paper (2009), our eyes are thrust about the canvas searching for a place to rest. Piedilato presents a visual feast of impasto colliding with linearity, which gives the viewer an aesthetic space that is simultaneously close and far away. The colors jump off the canvas against the notebook paper backdrop. Piedilato grants us enough pictorial ambiguity to leave us wanting more, while allowing us some semblance of understanding using the recognizable notebook paper lines and cubes.
Other works, such as Smokestack (2008) have much more settled compositions. Here the eponymous smokestack serves as the anchor around which all else revolves. The bold combinations move the viewer’s eye through the canvas, but the space is much more easily reconciled. The repeated motif in the background meets the waves in the center in an explosion of dynamic paint drips. The expressive blue, gray, and black strokes suggest water, destruction, and ultimately: abyss.

In Q-bert (2008) the rendered cube motif seen in Notebook Paper vanishes and is replaced by an angular black void that balances the expressive multi-colored billows. A play on the classic arcade game, the pyramid is especially significant given the two-dimensional plane.
Without the repeated motifs, the sheer physicality of the work is apparent. The scale of the canvas testifies to the artist’s use of paint rollers to communicate the interaction between the void and the elements surrounding it. Thus, the process is an active part of Piedilato’s story.

Andrew Piedilato was born in Athens, Georgia and attended the University of Georgia, Athens where he received a BFA in painting 1997. He received his MFA from Pratt Institute in New York in 2002. Piedilato was the recipient of the George Segal Grant for Painting in 2005. This is Piedilato’s second solo exhibition with Patrick Painter, Inc. He had a recent solo exhibition at English Kills Gallery in Brooklyn, New York, and was also part of a group show at Patrick Painter, Inc. earlier this year. He currently lives and works in Brooklyn, NY
www.patrickpainter.com