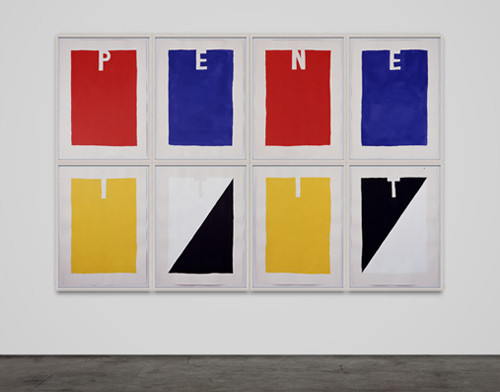 Patrick Painter Inc. is pleased to present works of Bas Jan Ader in the East and West Galleries, from January 16th to February 13th, 2010. The show will present a major neon sculpture, as well as photos and works on paper at our West Gallery, and the major slide installation In Search of the Miraculous in our East Gallery.
Dutch-born, California-based artist Bas Jan Ader (1942-1975) mysteriously vanished in 1975 when he set sail on what was to be the smallest sailboat ever to journey across the Atlantic during the execution on the third part of his work In Search of the Miraculous.
Ader left behind a body of work that borders a fine line between comedic and downhearted themes. Now in 2010, more than 30 years after his disappearance at sea, he is more influential than ever before. As is noted in the book Bas Jan Ader: In Search of the Miraculous, “He finds the truth of tragedy in the practical logic of bringing about existential decisions and emotional reactions by either pushing a situation to a point of crisis or by allowing a process to gradually reach a tipping point”.
The West Gallery explores the Dutch modern master Piet Mondrian’s influence on Bas Jan Ader, and the many works Ader created which directly reference Mondrian in the subject matter. Ader’s Untitled (Westkapelle, Holland) is staged in his native Netherlands, where Ader was filmed and photographed on a brick road leading to the Westkapelle lighthouse, which was an important and recurring subject in Mondrian’s paintings. In Piet Niet, Ader adapts the same geometric structure and color schemes as Mondrian’s abstract Composition paintings. In Pitfall on the Way to a Neo-Plasticism, Ader, dressed entirely in black, has fallen onto the brick road directing towards the Westkapelle lighthouse, resulting in him spilling the items that he is carrying; a plastic yellow paint can, a blue blanket and a red satchel, alluding to the primary colors in Mondrian’s late abstract paintings. Mondrian’s ideals of harmony and order are deliberately circumvented in the hands of Ader, who parodies the high seriousness of Mondrian’s work.
The East Gallery exhibits In Search of the Miraculous, in which a slide projector depicts 80 slides of a nonet. Dressed in all black with a pianist in the foreground, these slides feature a chorus of students from the University of California, Irvine, signing a series of sea shanties on an accompanying audio track. As the last work created before his death in 1975, this piece is particularly poignant and an important addition to the exhibition.
Ader graduated from the Otis College of Art and Design in 1965 with a BFA, and from the Claremont Graduate School in 1967. After graduating, Ader taught at many institutions, including Mount San Antonio College and the University of California, Irvine. Ader’s work has been exhibited at various institutions including: The Camden Art Centre, London, Museum of Modern Art, New York, and Centre Georges Pompidou in Paris.
The opening reception will be held on Saturday, January 2010 from 4-7pm
www.patrickpainter.com