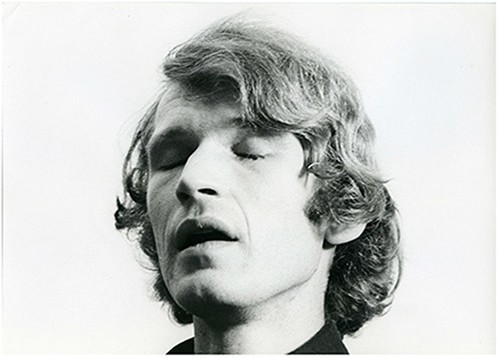 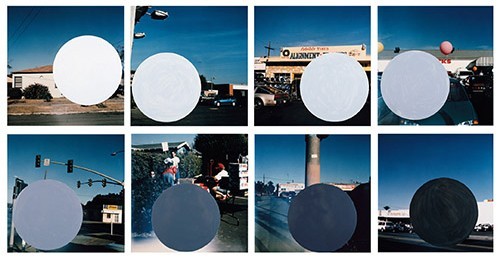 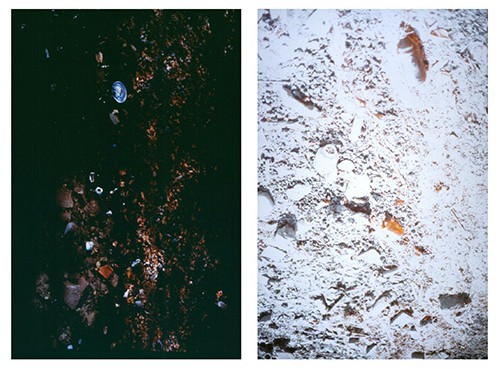 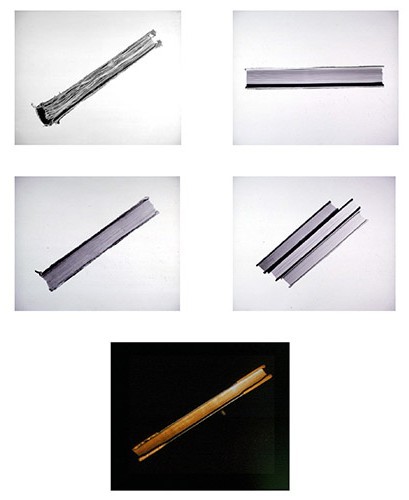 Despite his disappearance at sea in 1975, Bas Jan Ader left behind an impactful oeuvre that continues to captivate audiences nearly forty years later. From his iconic performance piece, I’m Too Sad To Tell You, this film still provides a glimpse into the enigmatic artist’s world. The work was documented through both photograph and film and was performed in 1970 and 1971. Ader originally sent out the images as postcards to his closest friends with the inscription, “I’m too sad to tell you.” Though the artist never revealed the source of his grief, we nonetheless connect to the emotion on a purely human level.

Ed Ruscha’s name has been synonymous with Los Angeles art since the 1960s. In Books (2001) Ruscha tackles simple images and transforms them into art objects. This edition is comprised of five photographs: four silver gelatin and one cibachrome. Each image depicts the sides of books from different angles. The printing technique lends the photos a drawing-like quality that transcends their seemingly ordinary nature. These five images continue Ruscha’s exploration with a myriad of banal images and words that are both kitschy and personal. The vernacular undertones open a dialogue that is deceptively complex.

Throughout his decades-long career, John Baldessari has challenged our expectations of how images function in our lives, often by bringing the viewer’s attention to minor details, absences, or the spaces between things. National City (1996/2009), a homage to Baldessari’s hometown of National City, California, elevates the snapshots into the arena of high art. Each of the eight photographs contains hand-painted circles meant to cover ‘imperfections’ in the images. In contrast to the color photographs, the circles are painted in grey-scale from white to black. A keen interest in the mundane is an essential feature in Baldessari’s work and artistic philosophy.

Mike Kelley’s enormous body of work was colored with dark themes including death, sexuality, and the American Dream. Drawing from a variety of sources including memory, nostalgia, architecture, and Americana, Black Garbage (Grassy Island [Canadian]); White Garbage (Bob Lo Island) (2001) presents the viewer with an image of garbage as high art. With these images, colorized by the artist, we get a startling contradiction of trash and treasure. Part of Kelley’s Detroit River Project, Kelley photographed images from islands in and around the Detroit River as a testament to the landmarks of his hometown.

Bas Jan Ader’s work is currently on display at Marlborough Chelsea, New York, and the Kunst Museum Bern, Switzerland. Ed Ruscha has had recent solo exhibitions at the Getty Museum, Los Angeles, the Los Angeles County Museum of Art, and Gagosian Gallery, New York. John Baldessari’s work has recently been on display at Museum of Contemporary Art San Diego, and Marian Goodman Gallery, Paris. A retrospective of Mike Kelley’s work has travelled internationally to highly prestigious institutions including: the Stedelijk Museum, Amsterdam, the Centre Pompidou, Paris, and the Museum of Modern Art PS1, New York. The Kelley retrospective is currently on display at the Museum of Contemporary Art, Los Angeles.
www.patrickpainter.com