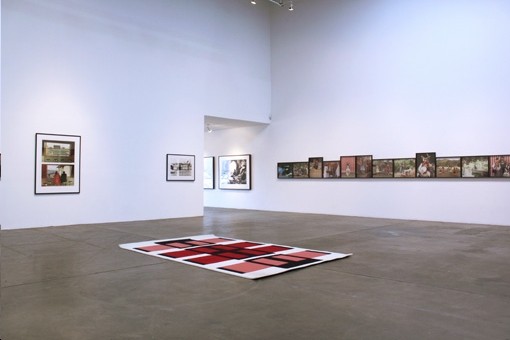 Patrick Painter Inc. is proud to present a group exhibition of works by Baldessari, Brown, Export, Gordon, Graham, Kelley, Ruscha, Weber, and Zittel in out West Gallery at Bergamot Station.
John Baldessari’s series of eight color photographs “National City”, depict a theme that the artist has returned to throughout his long and varied career. Baldessari challenges the viewer to carefully consider the image and examine the often overlooked margins and peripheries.
In Glenn Brown’s “Revolutionary Youth”, the artist re-presents an appropriated image from a Sci-Fi novel, dramatically altering it digitally and creating a very dramtatic effect. Brown recently had a mid-career retrospective at the Tate Liverpool, the Fondazione Sandretto re Rebaudengo, Turin and the Ludwig Museum, Budapest.
The Viennese artist, Valie Export, is a legendary figure noted for being one of the first female artists to exploit video and film. Artist works with video installations, body performances, cinema, and photography. Her provocative works bring up much critical debate, and her black and white print, “Action Pants; Genital Panic”, is no exception.
Douglas Gordon’s “Monster Reborn”, is a self-portrait, one image manipulated with tape, completely distorting the face, and the other left untouched in its natural form. Gordon is one of the leading artists of his generation and won Britain’s prestigious Turner prize in 1996, and has exhibited widely including solo shows at the MoCA, Los Angeles and the Hirshhorn Museum and Sculpture Garden, Washington DC.
Dan Graham is a legendary conceptual artist, theorist, and art critic. We are pleased to show his classic piece, “View Interior. New Restaurant, Jersey City, N.J.” consisting of two ektacolor photographs which are indicative of his concerns with architecture, social spaces and the built environment. Graham had a recent retrospective at the MoCA, Los Angeles, the Whiney Museum New York and the Walker Art Center Minneapolis.
Drawing upon a wide variety of sources including history, music, politics, criminality, architecture and memory, Mike Kelley’s work confounds and challenges the viewer’s expectations. “Black Garbage (Grassy Island [Canadian]); White Garbage (Bob Lo Island),” from the seminal 2002 exhibition Black Out originally presented at Patrick Painter, is related to his Detroit River Project, an ongoing theme in his work.
Ed Ruscha’s classic work “Sunset Strip” consists of six selected photographs, one which we will be featuring, of the strip in Los Angeles, a fusion of his book works along with the cinematic depictions of America, anthropology of the city, and a history of the urban. The sense of nostalgia is played upon by the rendering of the photograph with acrylic paint to appear more like vintage film stills.
Marnie Weber’s “Film Production Stills From ‘Western Song” further develop a narrative based on her ongoing series The Spirit Girls. The story follows a group of girls who perform together in a band, die early and tragically, and then return as spirits to communicate their message of emancipation. She recently had a major solo show at the Le Magasin, National d'Art Contemporain de Grenoble, France, which was accompanied by a comprehensive catalogue.
The American installation artist, Andrea Zittel, is known for making “functional” art and we are pleased to present a piece entitled “Dining Room Carpet.” As the artist herself states, her work “is [an] ongoing endeavor to better understand human nature and the social construction of needs.” She has had major museum shows at the New Museum, New York and the MoCA, Los Angeles among others.
www.patrickpainter.com