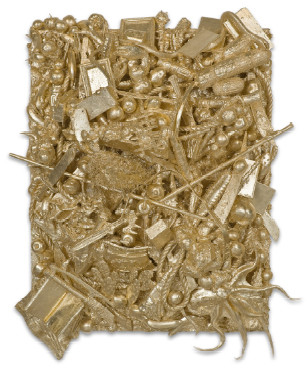 Patrick Painter Inc. is proud to present an exhibition of new works by John Miller at our East and West Galleries. Comprised of a series of color photographs, several gold leaf assemblages, rug pieces and wallpaper, the installations continue to explore the themes of accumulation and value found in Miller’s earlier work. Strikingly seductive, these new works encompass Miller’s outlook on the commodification of art in the humorous manner that has become the artist’s trademark.
The East Gallery features eighty-two photographs from Miller’s photo series, entitled “Middle of the Day”. Taken between 12pm and 2pm, these photographs feature people, buildings, and street scenes in which nothing appears to be happening. The photo series, which began in 1994, references the Freudian concept of life’s subliminal meaning in the banality of everyday life.
Miller transforms the West Gallery through the installation of several large rug pieces, which add an element of domesticity to the otherwise neutral gallery space. Miller started incorporating the rugs into his exhibitions for the first time in 2008, where they served as minimal compositions. Miller has since then expanded his repertoire to include more contrast within these pieces. Decorative wallpaper is adhered to one of the gallery walls, which further underscores an element of décor and the domestic space.
The West Gallery also features seven large reliefs that encompass conglomerations of kitschy and commonplace objects, such as plastic fruit and toy guns, which are entombed in imitation gold leaf.
Known for his signature excremental brown impasto assemblages from the 80’s and 90’s, these golden assemblages can be seen as a departure from his previous scatological device. These wall-mounted panels seduce the viewer with their shimmering surfaces, drawing the viewer in to explore the meaning entrenched beneath the gaudy surface. These complex concoctions contain multiple meanings, including a contemporary reference to politics and war. The plastic guns, severed heads and even the crabs, with their shells serving as suits of armor, all maintain a martial meaning in their monochrome gold. These assemblages of bric-a-brac strike a dichotomy between the quasi-apocalyptic and the comfort of the everyday.
Born in 1954 in Cleveland, Ohio, Miller earned his BFA at the Rhode Island School of Design in Providence, Rhode Island in 1977. He continued his education through the Whitney Museum of American Art Independent Study Program in New York. His formal education was completed in 1979, when he earned his MFA from the California Institute of the Arts in Valencia, California.
Well-known as a writer, critic, academic, and curator as well as practicing artist, during the two decades of his career Miller’s work has been displayed in over fifty solo exhibitions, including recent shows in New York, London, and Paris. His work has also been included in nearly three hundred group exhibitions, including shows at the Museum of Modern Art in New York and Tate Liverpool in England.
His work is also featured in such prominent collections as The Whitney Museum of American Art, the Museum of Contemporary Art in Los Angeles, and the Carnegie Mellon Museum in Pittsburgh.
www.patrickpainter.com