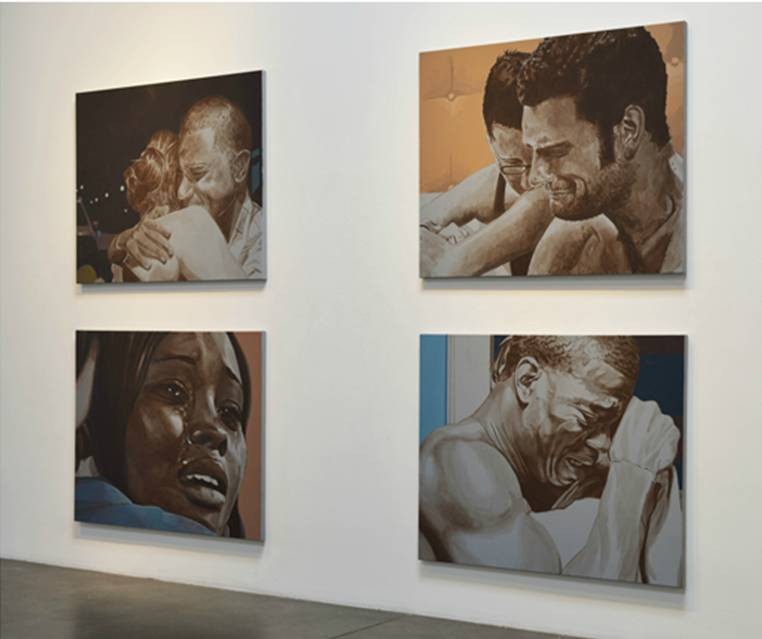 Patrick Painter Inc. is pleased to present New Realities, an exhibition by John Miller that explores obligatory vagaries of emotional exchange vis-a-vis the pop mediation of reality.
New Realities features Miller’s recent series of paintings, Everything is Said. Sourced from a constant stream of available imagery, these works depict people crying on reality television.
Their muted pallet removes the images from the tawdry glimmer of the mass media and renders them as hand-painted artifacts. With its ability to enact trauma – both real and fake -- for consumers, reality television has turned the capacity to emote into a viable career option, even a path to celebrity. The consumer, in turn, now watches human degredation and alienation as a form of entertainment.
The serial and formulaic aesthetic of Miller’s canvases becomes apparent in juxtaposition to the other objects in the space. In a gesture consistent with the artist’s sociological investigation into so-called middlebrow culture, Miller also displays two pieces of pre-fabricated furniture, a table and a dresser, in the gallery. The table is upside-down and across the room, the dresser sits on its side. Here, the organization of typical domesticity and the social usage of such spaces are literally turned askew. Two stacked pedestals suggest a parallel between the functionalistic design and purist esthetics.
A third element, wallpaper murals, contrasts with the paintings and furniture. With this Miller presents a mirrored image of a middle-class high rise collaged against a bodega doorstep.
These images are vector-based prints taken from the artist’s ongoing series Middle of the Day, 1996-present, comprised of photographs shot between 12 and 2pm. Recognizing it as an illdefined time of day, potentially devoted to either work or rest, Miller mines this daily time period for imagery that resists the spectacular, even when blown up to a mural scale. In conjunction with the furniture sculptures and paintings from TV, the wallpaper indexes a type of bifurcated space, at once both public and domestic.
This is John Miller’s second solo show with Patrick Painter Inc. His work is also currently on view in the exhibition American Exuberance from the Rubell Family Collection. A detail from one piece appears on the cover of the accompanying catalogue. Miller is the recipient of the 2011 Wolfgang Hahn Prize, which coincided with an exhibition at Museum Ludwig, Cologne. In 2009 the Kunsthalle Zürich held a retrospective exhibition of his work that was accompanied by a catalogue published by jrp|ringier. Miller has had solo shows at: Musée d’art moderne et contemporain, Geneva (2004); Magasin-Centre National D'Art Contemporain, Grenoble, France (1999); and Kunstverein Hamburg (1999). He has participated in major group exhibitions at CAPC Musée D’Art Contemporain, Bordeaux (2010/11); Museo Nacional Centro de Arte Reina Sofía, Madrid (2010); and MoMA PS1, New York (2006). His work was included in the 1991 Whitney Biennial in New York and the 2010 Gwangju Biennale in South Korea. Miller’s forthcoming anthology of the artist’s criticism, The Ruin of Exchange will be published in June 2012.
www.patrickpainter.com