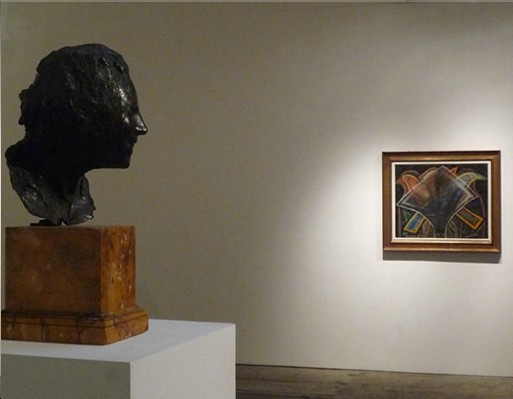 From the mid-1880s to his death in 1928 Medardo Rosso, with his contemporary Auguste Rodin, pushed impressionist sculpture into new and uncharted post-impressionist territories; in doing so they ushered in the advent of Modernism in the 20th century. As the only Cubist to attend the landmark 1913 Armory Show in New York, Francis Picabia served as an enthusiastic ambassador in spreading the latest ideas from Europe; concepts influenced by Rosso’s work in the decades leading up to this point. Picabia proceeded to play a pivotal role in Dada circles in Barcelona, Zurich, and Paris, before becoming a proponent of Surrealism. In the same vein of invocation, but decades later, Julian Schnabel kicked open the doors to Neo-Expressionist painting to became the most recognized participant in the most prominent movement of that decade. Mike Kelley’s genre crossing and collapsing oeuvre that incorporated performance, installation, video, and more had an equally profound influence on his contemporaries. Drawing this group together is his drawing Mrs. Gorky’s Butthole; Arshille Gorky himself drawing influence as a student in the early 1920s from impressionist and then post-impressionist work, bursting through surrealism, and ultimately devising his own novel form of painting that exerted its influence over development of Abstract Expressionism in America in the late 1940s and 1950s
www.patrickpainter.com