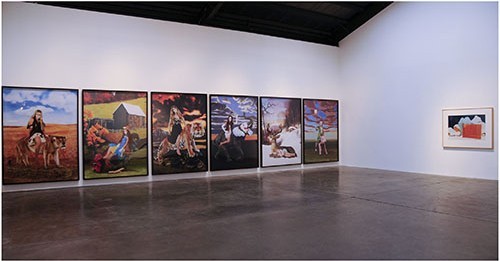 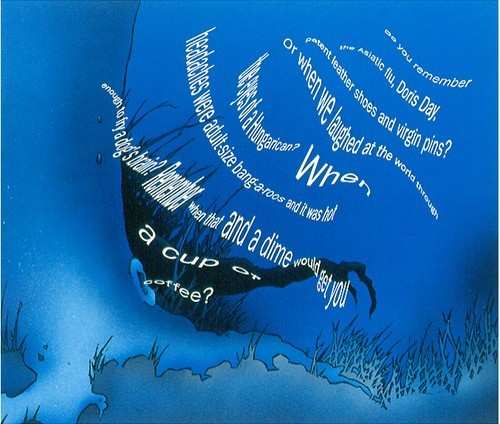 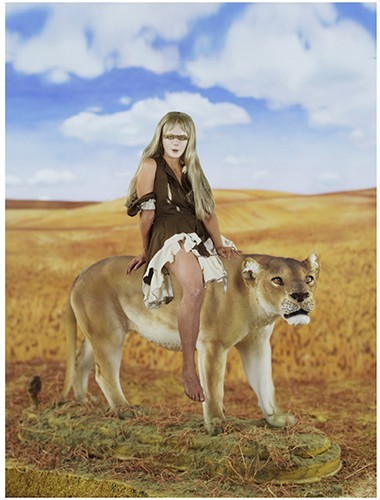 Patrick Painter, Inc. is pleased to present an exhibition of work by Los Angeles-based artists Larry Johnson and Marnie Weber. The exhibition will feature pieces that explore different approaches to photo-based imagery.

The voice behind Untitled (Ghost Stories) (1992) addresses memories of the fictional variety. During the 1970’s and 1980’s in America, the media ushered in 1950’s nostalgia. ‘Doris Day,’ ‘patent leather shoes,’ and ‘virgin pins,’ refer to the decade immediately preceding Johnson’s own historical memory. Because the text directly addresses the viewer, there is a presupposition of collective memories. Here Johnson pokes fun at the media-engendered capacity to fondly remember a past that no one ever really knew. "Hungarican" is a combination of ‘Hungarian’ and ‘Puerto Rican’ and alludes to 1970’s comedian Freddie Prinze, who shot himself in the head.

This body of photo-collages by Marnie Weber follow a narrative based on her on-going series, titled, “The Spirit Girls.” The story chronicles an all-female band whose members die tragically, but due to unfulfilled dreams, return as spirits to communicate their message of emancipation. With accompanying music and performance, the group is inspired in part by the American Spiritualist movement of the 1850’s. With their costumes, masks, and wigs, the Spirit Girls create a musical performance that is consciously visual.

In A Warm Deer (2007) a Spirit Girl is pictured lying down in front of a large stag. A snow-covered forest envelops them in the background. Weber’s use of strange, exaggerated color and motifs span a range of art historical and pop cultural references which render the time ambiguous. The sinister look in the Spirit Girl’s eyes defies the child-like innocence of her pose. The mask leaves her emotions up for interpretation. The scene is reminiscent of tableau vivant, and creates a palpable sense that this is a snapshot in her performance-journey. The absurdity and whimsy nonetheless carry dark undertones.