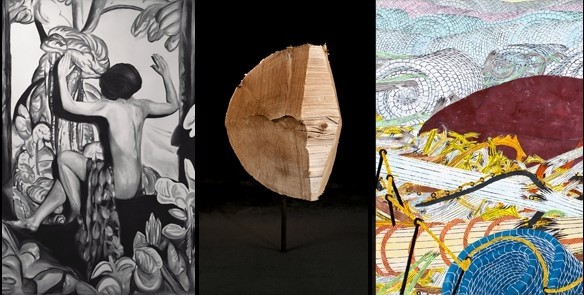 Patrick Painter Inc. is pleased to present Gallery'Show'of'New'Artists, featuring the works of Rinus Van de Velde, Andrew Piedilato and Sonny Assu. Spanning across multiple mediums and disciplines, this exhibition will bring together works from these three new artists that our gallery recently began representing.
Hailing from Antwerp, Belgium, and fresh from his recent solo exhibition at CAC Málaga this past March, Rinus Van de Velde has reached international acclaim through the success of his large scale figurative charcoal works. Van de Velde uses the mediums' unique ability for subtle shades and deep shadows to intertwine emotion and narrative from individual works into a larger story line. This can be seen in A Triptych'of Questions, which visualizes the conversation among three characters by merging text and imagery.
Andrew Piedilato is an emerging artist from Brooklyn, New York who is quickly gaining national recognition for the unique combination of energy and discipline in his work.
Piedilato first exhibited with us in 2011, and in this exhibition we will feature his new works Low'Tide,Hull and Sea'Coffin. His works are large in scale and embody both architectural and abstract elements while juxtaposing texture and drawing. Illusionary mosaics cover the surface of the works while depicting the tumultuousness, anxiety and strength of the sea. Piedilato’s work was recently included in the Peekskill'Project'V group exhibition at the Hudson Valley Center for Contemporary Art in New York.
Sonny Assu is an interdisciplinary artist from Montreal, Quebec, who pushes the boundaries of contemporary art by challenging the perception of indigenous art through merging indigenous iconography with aesthetics of popular culture in order to challenge the social and historical values placed upon both. His work has been accepted into the National Gallery of Canada, Seattle Art Museum and the Museum of Anthropology at University of British Columbia. The three sculptures come from Assu’s Longing series, in which he constructed masks out of discarded wood from his reservation, which had been used to build luxury homes, and thereby redefined the material as indigenous masks.
www.patrickpainter.com