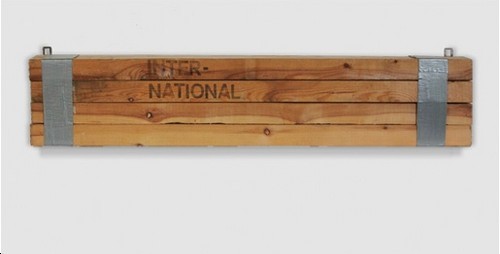 Patrick Painter Inc. is pleased to announce our group sculpture showfeaturing artists Thomas Helbig, Georg Herold, Melli Ink, Won Ju Lim, Michelle Segre, and Jim Shaw.
Thomas Helbig is a German based artist whose sculptures are both sinister and humorous, suggesting apocalyptic narratives that are simultaneously glamorous and abject. At first glance, Helbig’s sculptures appear to be futuristic ruins -- bizarre and broken finds hinting at some remote civilization, glorifying its defunct authority. Although they are reminiscent of artifacts, they are made from contemporary objects and knickknacks found in dustbins and flea markets. Through this process of abstraction, Helbig poses formal solutions as literary escapism, drawing a timeless mythology from the everyday. His most recent solo exhibitions include Galerie Rüdiger Schöttle, Munich, Germany Rom, Galerie Guido W. Buadach, Berlin, Germany Otherlife, Stuart Shave, Modern Art, London. Like many established German artists, Georg Herold grew up in East Germany and made his reputation in West Germany. With minimal means, the pieces speak eloquently about the perceived inaccessibility of cultural greatness under postmodernism. Herold's satirical cynicism is aimed both at the inflated mysticism of some contemporary (German) art and also at the self-satisfied Spiessburger (petits bourgeois) of postwar West German society. Herold studied at the Academy of Fine Art in Munich and at the Academy of Fine Art in Hamburg. His most recent solo exhibitions include Museum Ludwig, Cologne and the Stedelijk Museum voor Actuele Kunst, Gent.
Melli Ink is a Switzerland based artist who explores nature in her work by transforming organic objects into striking glass sculptures. An artist with a background in stage and set-design, she constructs fine-art installations built around large-scale, exquisite glassworks. Ink shows great range in her sculptures, some bearing a resemblance to the famed Blaschka glass models, others evoking Edward Gorey's gothic fantasies, and still others bringing to mind classic anatomical models rendered in stark, glistening crystal. Ink studied theatre design at Central St. Martins College of Art in London. Since then, her work has been exhibited in Austria and throughout Germany.
Won Ju Lim creates multimedia sculpture-based installations using a series of assembled panes of plexiglass and projections of bold colors and scenery. Her manipulation of physical space, as well as her pieces’ interactions with natural time and the viewer’s memory, create an engaging and surreal atmosphere.
She was the recipient of the Rockefeller Foundation Media Arts Fellowship. She earned her MFA from the Art Center College of Design in Pasadena, and currently lives and works in Los Angeles. Since then, her work has been exhibited at such institutions as the UCLA Hammer Museum, the Japanese American National Museum in Los Angeles, and The Claremont Museum of Art.
Both sculptor and draftsperson, Michelle Segre is known for large-scale organic sculptures and crowded linear drawings. She approaches each medium with microscopic attention; her works are highly detailed and finely realized studies of entropic growth and disintegration. The influence of artists such as Jasper Johns,
Phillip Guston and Charles Garabedian lie behind Segre’s whimsical works. Segre was born in Tel Aviv, Israel. She received her BFA in 1987 from Cooper Union School of Art, and currently lives and works in New York City. Michele was the recipient of a Louis Comfort Tiffany Biennial Award in 2001. Her work is included in the collections of the Museum of Modern Art, New York, and the New Museum of Contemporary Art.
Jim Shaw is well known for his thematic explorations of the darkest corners of the American consciousness. Shaw's work constitutes a form of documentation and observations from the mind’s unsettling underground. Just as dreams can be seen as a wrestling match between the conscious and subconscious, Shaw's work seems to thrive on a tugging between his compulsion to confess and his compel to hold back. Shaw, born in Midland, Michigan, lives and works in Los Angeles. Attending CalArts in the 1970s, his works have since been exhibited at such institutions as the UCLA Hammer Museum, and will be exhibited at CAPC, Musée d’Art Contemporain de Bordeaux, Bordeaux on 2010.
The opening reception will be held on Saturday, September 12, 2009 from 6-8pm
www.patrickpainter.com