Titans of the Stratosphere 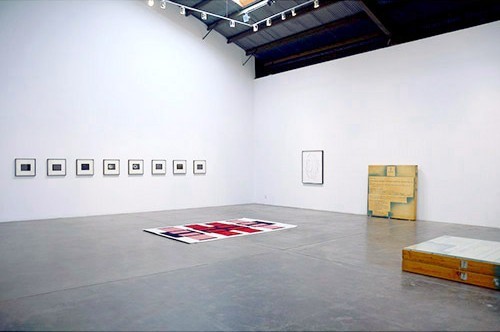 Although he works in a wide array of media, Rodney Graham’s artistic philosophy is grounded in photoconceptualism.
For the film Coruscating Cinnamon Granules (1996), Graham scattered ground cinnamon onto a burner of the stove in his kitchen and filmed the glowing specks. Graham was inspired by an old realtor’s trick used to make homes smell more inviting. These photogravure stills, Coruscating Cinnamon Granules, (1996), touch on the same phenomena of light explored in the film. Floating in black space, without the context of a background, the images could be macro or micro. The shape makes reference to Marcel Duchamp’s Rotorelief and Robert Smithson’s Spiral Jetty.

Stephen Prina’s Monochrome Painting: A Posterior Prototype: Average Size, (1994) relates to an installation he had at the Renaissance Society in Chicago. That installation, The History of Monochrome Paintings, consisted of 14 referential monochrome paintings. These works consist of a painting and its crate. If one painting is purchased, the owner may place the crate perpendicular to the wall as a bookcase. If two paintings are purchased, the owner may lay one crate flat on top of another with a sheet of glass, so that it can be used as a table. A third optional cushion was available so three crates could become a seat.

Though usually associated with his large graphic and text-based paintings, Christopher Wool’s oeuvre includes an extensive array of photographs, including Incident on 9th Street (1997). The photographs depict the aftermath of a fire in the artist’s New York studio. Though originally intended for his insurance company, the artist decided to publish the thirteen silver gelatin prints as a portfolio. Due to their documentary, matter-of-fact style, the photographs are eerily reminiscent of crime scene photographs. The sensational nature of the images imbues them with a sense of voyeurism, as though the viewer is looking at something he shouldn’t.

Joshua Tree-based Andrea Zittel’s work explores the complex definitions of objects. A continuation of Zittel's ongoing series A-Z Enterprises, which in the past has yielded furniture, homes and vehicles for contemporary consumers and herself, the piece offers a new take on the normal associations of the carpet. A-Z Dining Room Carpet (1995) proposes a new way of living. The series highlights the distinctions between art (a conceptual object) and design, (a functional object), while also bringing to mind two-dimensional painting and three-dimensional sculpture. Thirdly, it explores representation (illusion) versus literalism (an actual object).

These artists have exhibited at the most prestigious international institutions. Rodney Graham has had recent exhibitions at 303 Gallery in New York, and the DIA Foundation in Detroit. A traveling retrospective of Mike Kelley’s work is currently on view at MOCA Los Angeles after coming from MoMA PS1, in New York and the Centre Pompidou Paris. Paul McCarthy’s work has been recently shown at Hauser & Wirth, New York, and the Hammer Museum, Los Angeles. Christopher Wool’s work was recently been on view at Gagosian Gallery, London, and the Guggenheim in New York. Andrea Zittel’s work can be found in notable private foundations and public institutions such as the Museum of Modern Art, New York; the Hammer Museum, Los Angeles; and the Metropolitan Museum of Art, New York.
www.patrickpainter.com