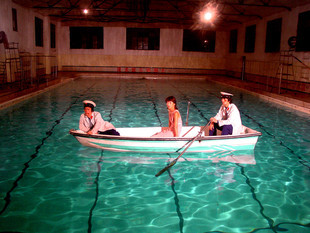 The donation of 375 video works from the Goetz Collection to the Free State of Bavaria in 2014 seals a gap in the Bavarian museum landscape while simultaneously continuing Munich’s long-standing tradition as a film and media hub in Germany. The endowment now provides a variety of opportunities for future displays in the area of video and new-media art. Last year saw the launch of the art-film festival KINO DER KUNST, which garnered international attention from the moment the lights dimmed for its very first screening. KINO DER KUNST is about to be held for the second time, with events taking place from 22 April to 26 April 2015.

The Goetz endowment and the upcoming festival now provide the perfect opportunity for a comprehensive exhibition of video works at both the Pinakothek der Moderne and Museum Brandhorst. The exhibition ‘Creating Realities – Encounters between Art and Cinema’ takes a closer look at fictional narration in contemporary new-media and video art and also draws from the theme of this year’s KINO DER KUNST festival.

On show are works by 17 video artists who were born in the decades from the 1960s to the 1980s. This generation of artists uses new media art to explore the reception and reflection of narrative cinema. The curators have selected some films and multi-channel video installations with a fictional character and innovative narrative structure. What they all share is a hermetically sealed, immersive visual world, as well as an outlook that is lyrical or utopian.