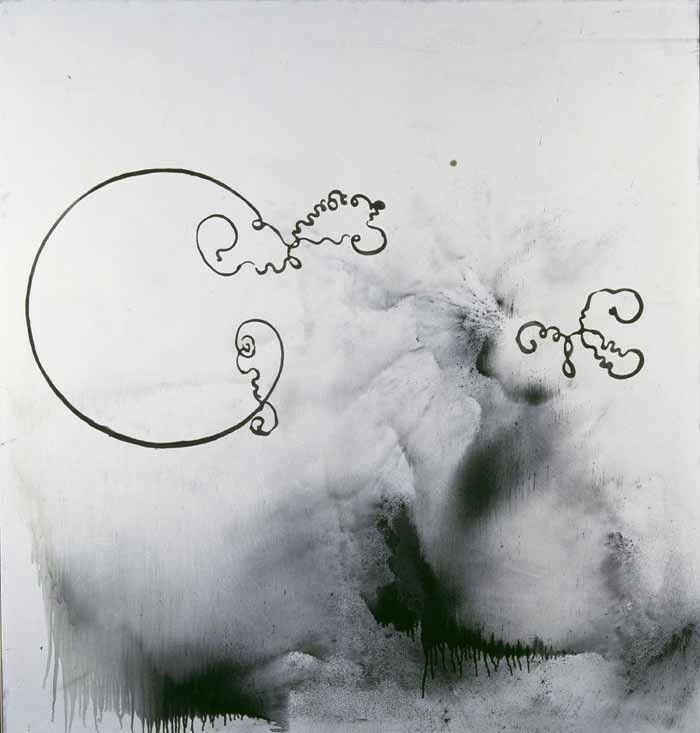 The concepts “black and scriptural” form a striking connection between two work cycles by Sigmar Polke (1941–2010) and by Fabienne Verdier (b. 1962), here exhibited in productive juxtaposition. The work of contemporary painters, as in the Sammlung Moderne Kunst and the Brandhorst Collection, is naturally multifaceted, colourful and materially dense, ranging in style from abstraction to figuration, both narrative and symbolic. But painting can also come in reduced black-and-white or strict monochrome: in fact, this has been a standard practice for centuries. In this mode, painting bears a close relation to calligraphy, draughtsmanship, and the graphic arts. In all these contexts, the line is fundamental, whether straight and spare, or made with grand sweeps of a paint-saturated brush, as in Verdier’s work. The transgression of media boundaries is just as important. This is made clear in the “Dürer-Loop” cycle, in which Polke, a humorous and mercurial painter, engages with Albrecht Dürer, the greatest German artist of the Renaissance. These have the format of paintings, but are executed with a disciplined draughtsman’s line, and they use silver oxide, a material more usually associated with photography. Polke’s eight “Dürer Loops” were created for the German Pavilion at the 1986 Venice Biennale. They were acquired in 1992 by the Bayerische Staatsgemäldesammlungen with the support of PIN. Freunde der Pinakothek der Moderne. Verdier’s “Mélodie du reel” was made for the 2014 exhibition “Königsklasse II”, at Herrenchiemsee New Palace. It was acquired for the Bayerische Staatsgemäldesammlungen in 2016, with the assistance of the International Patrons of the Pinakothek.
www.pinakothek.de/pinakothek-der-moderne