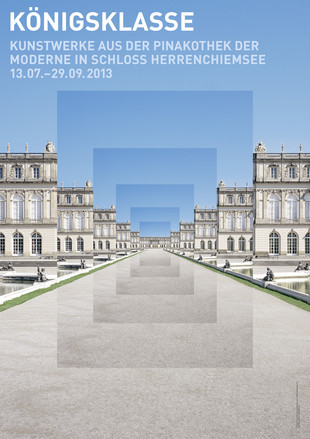 This summer, the north wing of Herrenchiemsee Palace, built by Ludwig II, provides the glamorous setting for artworks from the Pinakothek der Moderne. For the first time on this site, modern meets tradition, Europe meets America. Exhibition spaces filled with major works by Georg Baselitz, Joseph Beuys, Sigmar Polke, Arnulf Rainer and Eugen Schönebeck respond to large-scale installations by Dan Flavin, Andy Warhol, Willem de Kooning and John Chamberlain.
The exhibition builds on the diverse cultural achievements of the House of Wittelsbach, whose knowledgeable representatives passionately collected works by the best artists of their time and eventually made these collections available to the public. Today, this tradition of art collecting, to which the exhibited works also attest, is supported by a broad public. Thanks to this extensive commitment, the past and the present meet at Herrenchiemsee this summer. One of Germany's most famous structures, the palace complex is situated on an enchanting and beautiful site located between Munich and Salzburg and can now be experienced as a whole.
www.pinakothek.de/pinakothek-der-moderne