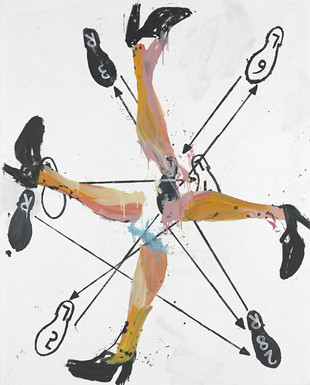 One year after the successful first exhibition at Herrenchiemsee Palace, the partially completed north wing of the palace commissioned by King Ludwig II will again serve as the setting for a selection of outstanding contemporary artworks. In contrast to the usual museum context, the special location will feature paintings, sculptures and installations by Andy Warhol, John Chamberlain, Dan Flavin, Cy Twombly, Willem de Kooning, Georg Baselitz, Arnulf Rainer, Imi Knoebel, Wolfgang Laib and Fabienne Verdier. Several works, including the pollen work by Wolfgang Laib and the painting series by French artist Fabienne Verdier, realized using a unique calligraphic technique, were created with this unusual venue in mind. Other works were selected in cooperation with the artists or representatives of their estates, or stem from the holdings of the Pinakothek der Moderne and Museum Brandhost.
The reciprocal and multidimensional dialogue between the creative work of the artists that radically looks to the future and the ever-fascinating anachronistic concept of beauty of Ludwig II, which expresses the Bavarian king's veneration in the 19th century for the absolutist King Louis XIV and his palace Versailles, generate a fertile tension. As with Ludwig's royal palace, the artworks surmount their time through their own vitality; both are less concerned with function than with timeless reflection.
The exhibition was made possible thanks to the dedicated cooperation with the Bavarian Palace Department, substantial funding from the International Patrons of the Pinakothek and support from PIN. Freunde der Pinakothek der Moderne.
The exhibition “Königsklasse” was developed in close cooperation with the Bavarian Administration of State Palaces, Gardens and Lakes.
www.pinakothek.de/pinakothek-der-moderne