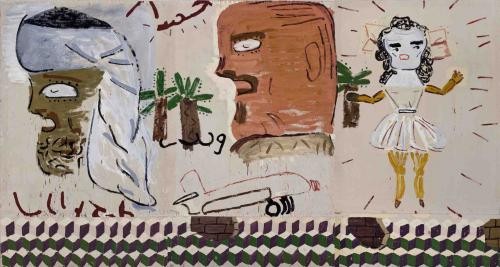 Regina Gallery is pleased to present the first solo exhibition in Russia by UK-based artist Rose Wylie. Wylie is known for her large-scale, loosely-painted canvases made on unstretched surfaces whilst laid out on the floor or pinned to her studio wall, depicting a surprising range of subject matter culled from media imagery, international news stories, film narratives, ancient art forms and memories from the 77-year-old artist’s childhood.
Born in Kent, UK, in 1934, Rose Wylie has described how her art school training in rural England laid the foundations for a life-long investigation into painting, memory and the translation of everyday experiences through art. The artist recently stated “Painting feels exciting... You don’t have to worry about your house falling down, or your family - you forget everything. I like the decisions that never stop coming when you paint - everything is a decision. How much of everything, how much contrast, how tight, how loose, how stupid, how elegant, how desperately awkward. I hate elegance... I like ducks”.
After exhibiting in her native country regularly during the past three decades, Rose Wylie has in recent years attracted a growing following around her work and seen curatorial and critical interest develop with pace. Notable exhibitions have been staged in London, New York and Berlin, and her largest solo-show to date is forthcoming at the newly-opening Jerwood Gallery in Hastings, UK, for Spring 2012. Wylie’s works possess a rare spontaneity and naive-ness, which has been cultivated along with her admiration for fellow European and American post - ”Junge Wilde” contemporaries - Tal R, Kerry James Marshall, Alex Katz and Jonathan Meese among them - and Meese has himself described Wylie’s practice as “Total Painting... Rose Wylie is total Radicalism”.
For the Moscow exhibition, Rosemount includes a selection of works spanning the last 13 years, from her latest filminspired series (including The Milk of Sorrow, 2009) to a vivid recollection of her family’s childhood home (Rosemount, 1999). With its schematically drawn architecture, crudely scrawled text and an imposing missile bomb flying overhead, one of many which she regularly observed during World War II, cruising past her towards its target in London, Rosemount’s apparently child-like, jerky, free-form composition belies the seriousness of the subject-matter and results in a visually compelling map of experiences and vividly relived memories.
Elsewhere, Wylie’s paintings address a diverse array of themes such as binge-eating, body adulation, stereotypicalbeauty worship, the iconography of sports stars and sporting occasions and the depiction of other world events in the media. Rose Wylie’s work offers an intriguing, uncompromising and non-judgemental perspective on modern life. This perspective is filtered through a handling of paint which despite its occasionally rough appearance (Wylie sometimes sticks extra pieces of material on the surface when she makes revisions to her pictures, creating a haphazard, collagelike effect), the paint is applied in a refined, pared-down manner in which only the essential remains.
For the first time in Russia, Rosemount offers viewers an ability to study this fascinating and excitingly idiosyncratic artist’s work as it has evolved and continues to do so.
Rose Wylie lives and works in Newnham, Kent, UK. She previously studied at Folkestone & Dover School of Art and Royal College of Art, London. In 2010 she was selected as single UK representative in the Women To Watch exhibition at the National Museum of Women in the Arts in Washington DC, USA. Previous group exhibitions include Rose Wylie Evan Holloway at The Approach, London (2011) and East International (2004, selected by Neo Rauch and Gerd Harry Lybke).
Previous solo exhibitions include Picture on the Wall at Michael Janssen Gallery, Berlin (2011), What with What at Thomas Erben Gallery, New York (2010), and Film Notes at Union Gallery, London (2010). In 2011 she was a recipient of the Paul Hamlyn award.
www.regina.ru