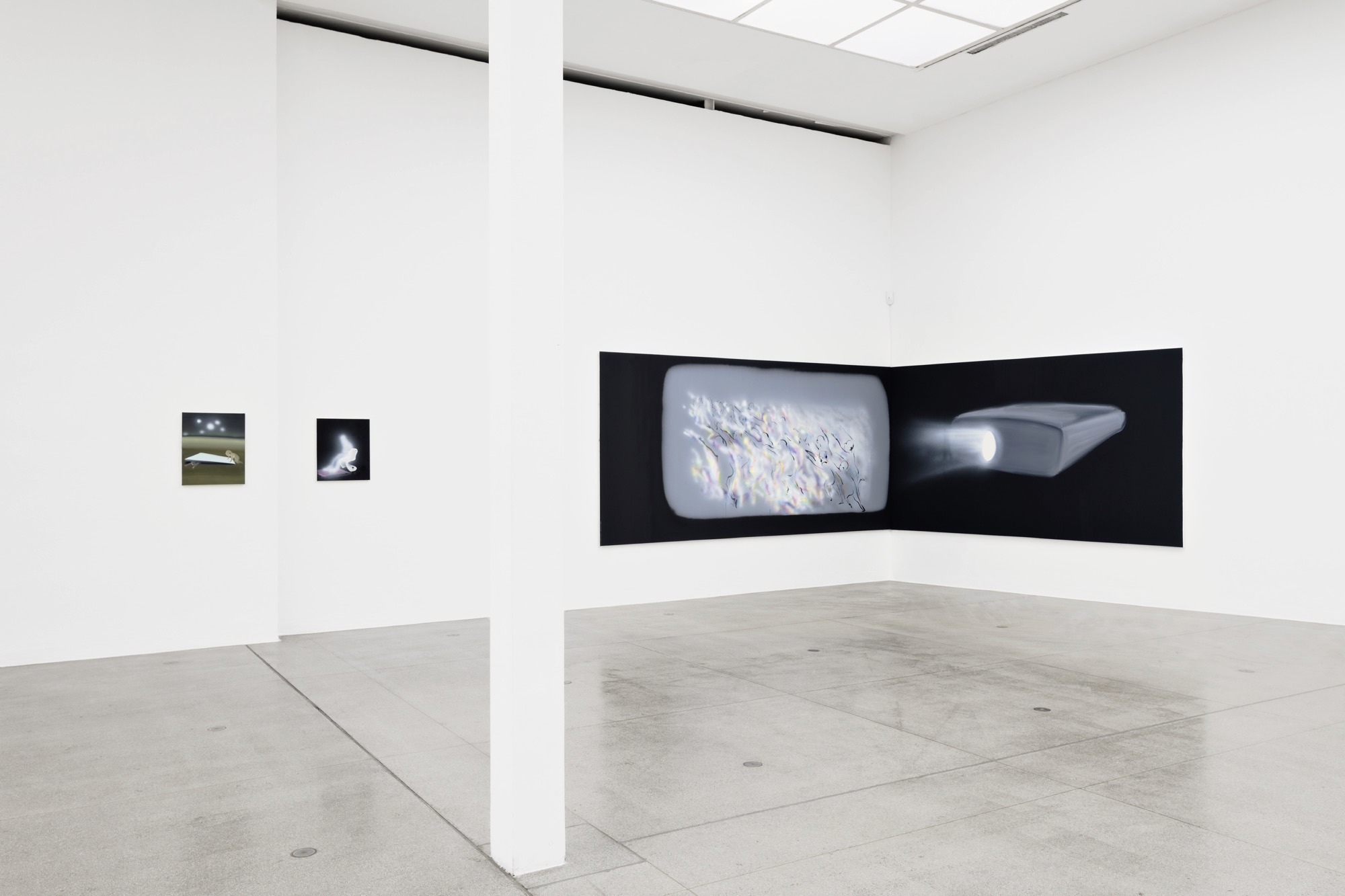 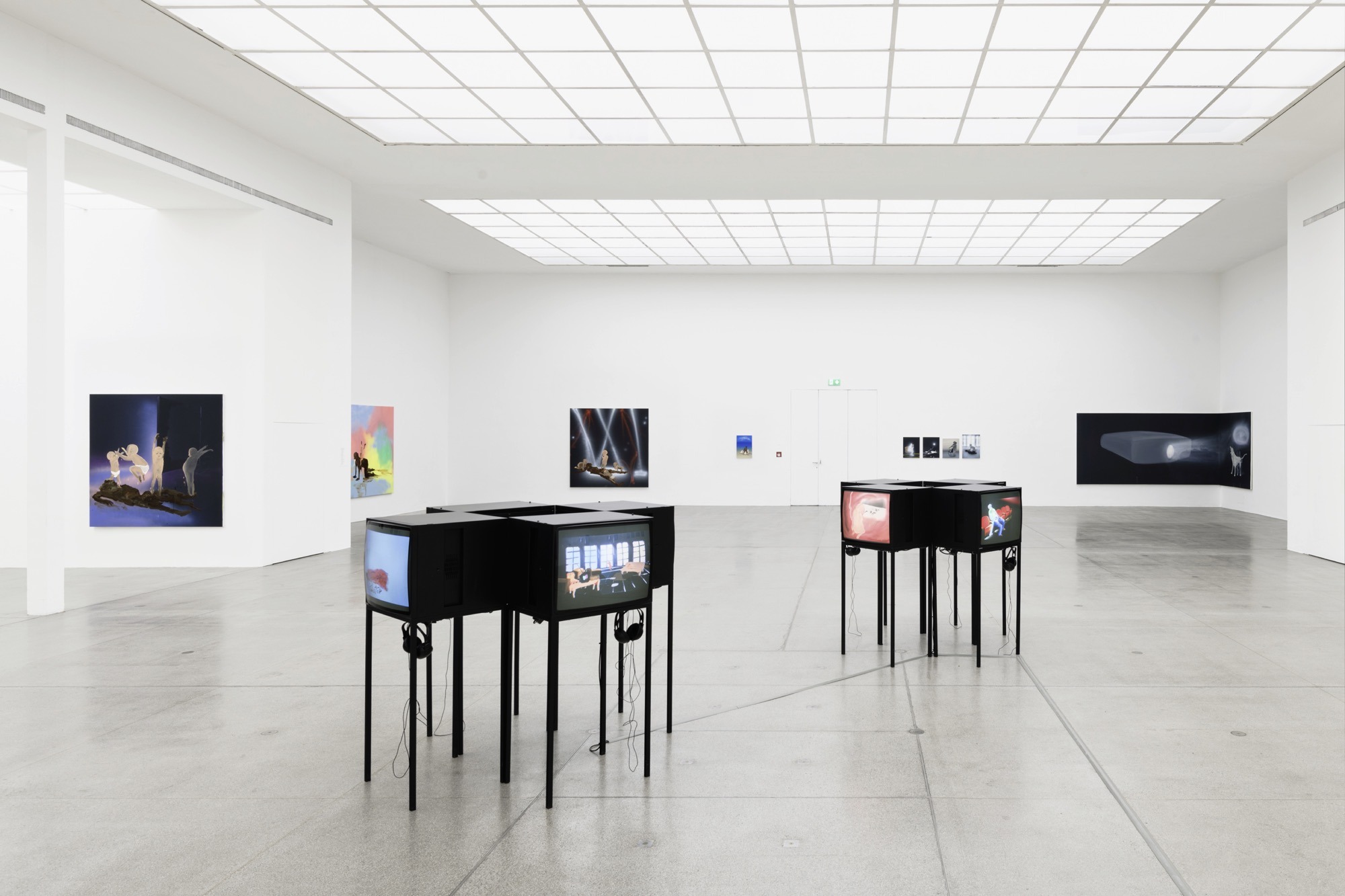 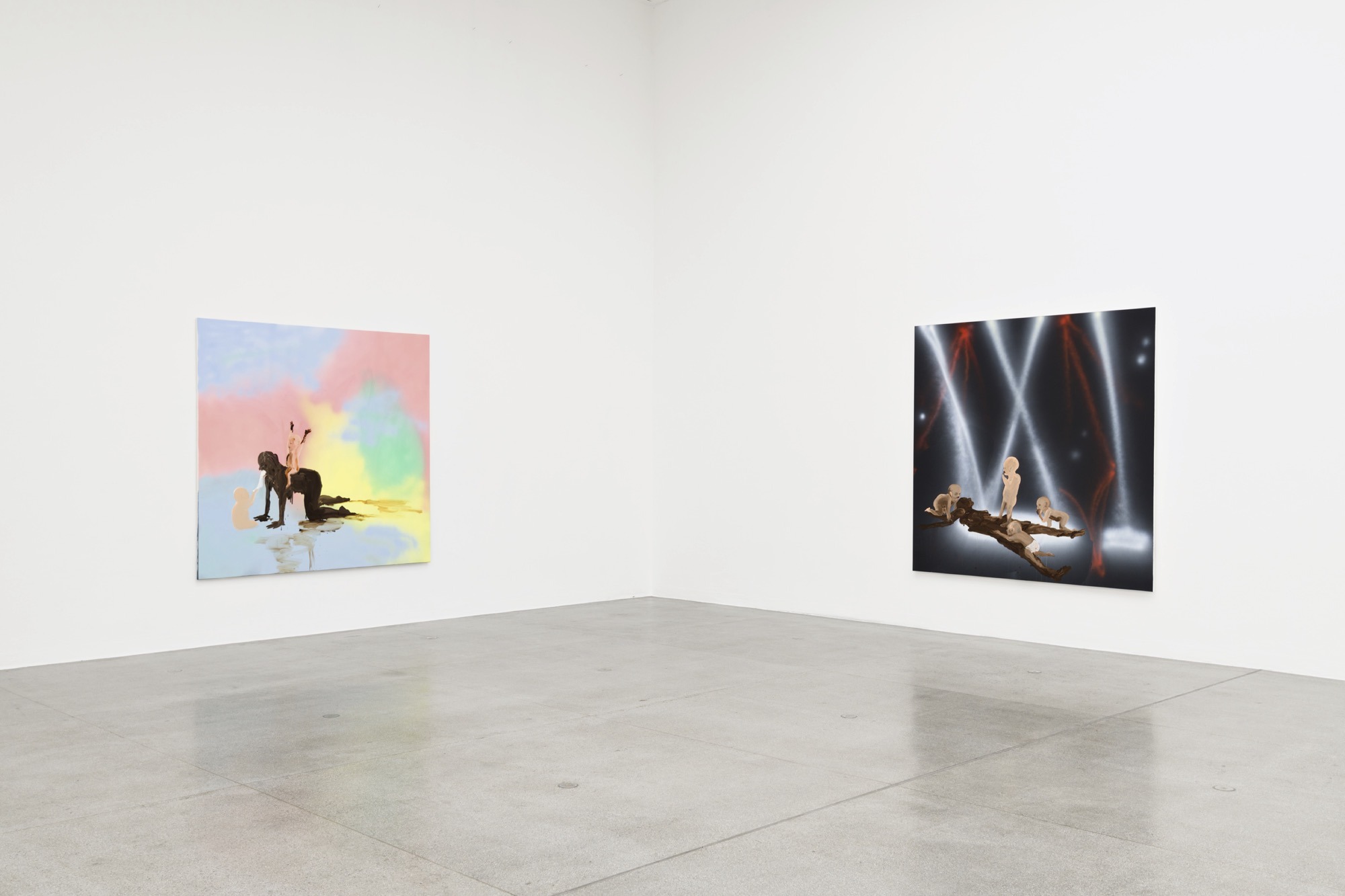 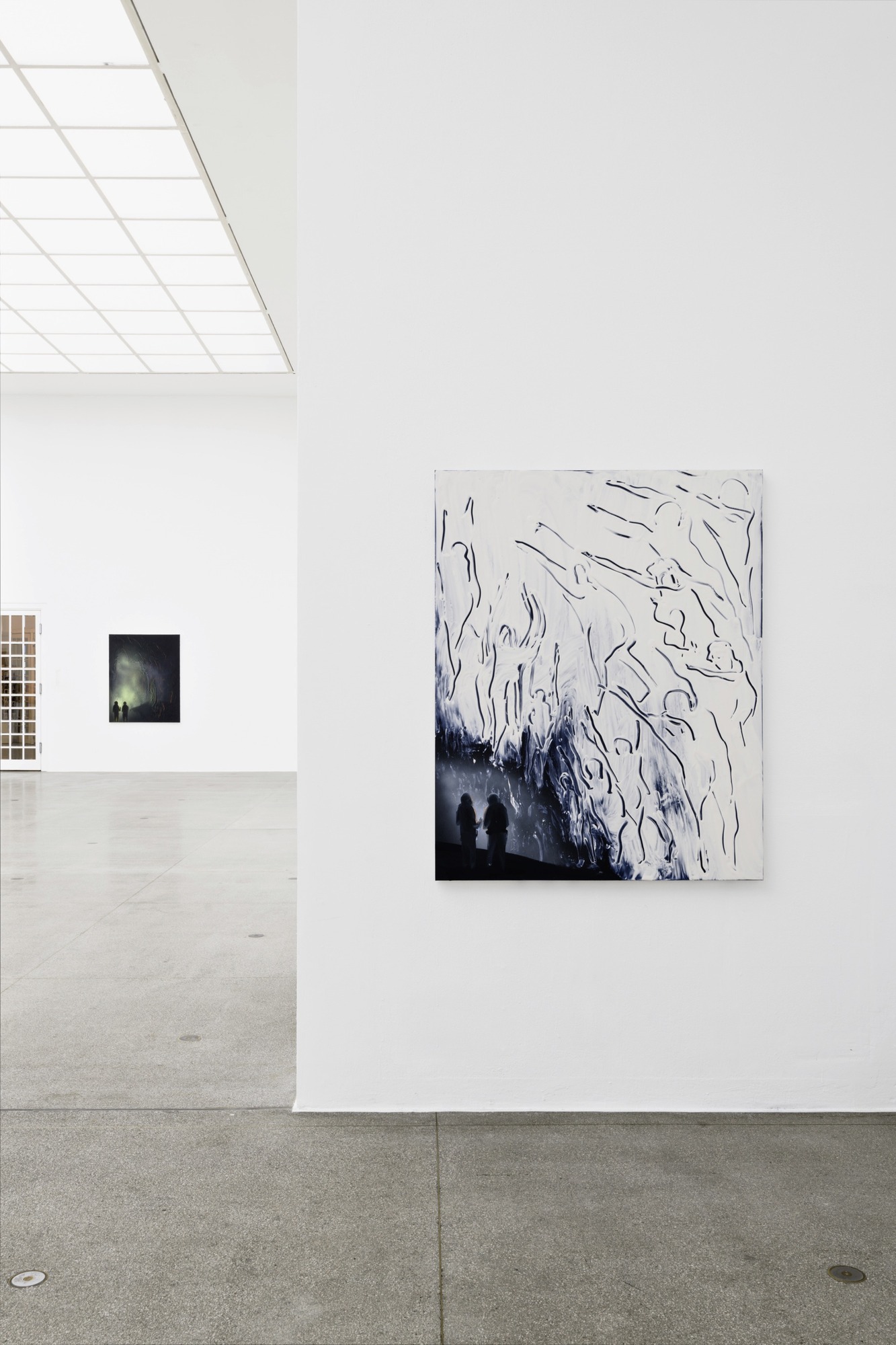 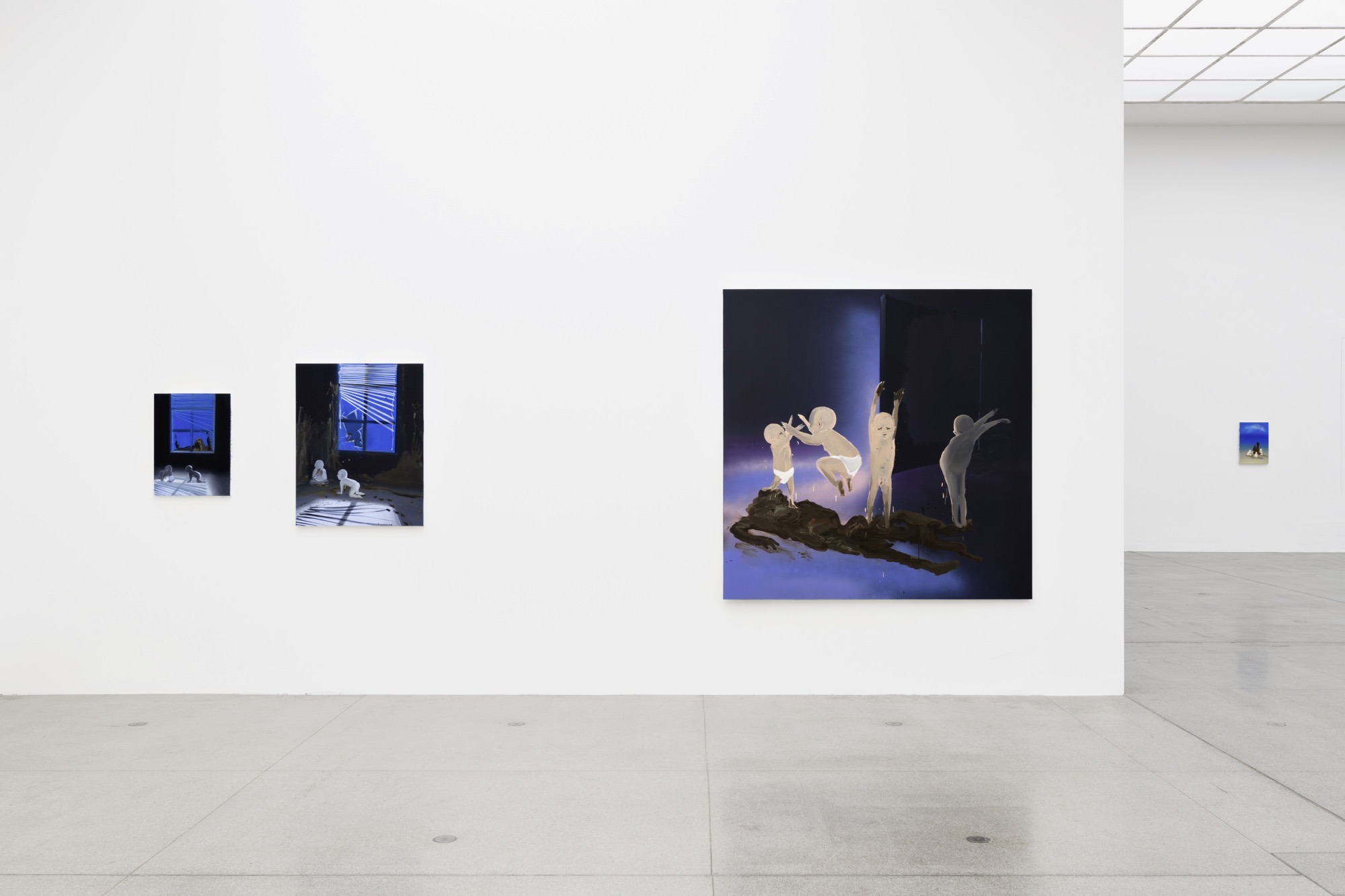 Tala Madani, Shit Mom (The Nursery), 2019; Shit Mom (Broken Window), 2019; Shit Mom (Quads), 2019, exhibition view Secession 2019, photo: Peter Mochi
Shit Moms is the title both of Tala Madani’s exhibition at Secession, her first solo show in Austria, and a new body of work. She deals here with concepts of domestic life and, more specifically, the idea(l)s and (corpo)realities of motherhood. While the title refers to the colloquial term for women who in some way fail their job or role as a mother, it also literally designates her approach to the theme: smeared, somewhat shapeless female bodies appear as mother figures made of excrement.

The shit mothers, shown in tender mother-and-child intimacy (At My Toilette #1, #2, #3) – drawing on the Western iconography of the Virgin Madonna and Child (the paradox of virgin maternity being a subject that has attracted Madani’s interest for a long time) – or surrounded, crawled over and jumped on by triples, quads and even larger tribes of infants, inhabit modernist apartments, appear in spot-lit disco halls, and peek at babies playing in abandoned houses. Picturing moments both of togetherness and isolation, they exude a sense of intimacy and human vulnerability.

Pictures of kids patting their shit-covered hands all over the place, coating whole interiors and staining sheets or curtains in careless agility and joyful activity, point to the origins of painting in prehistoric hand prints discovered in caves in Northern Spain, for instance. These are among the earliest examples of humankind’s creative drive, and demonstrate the urge to create, shape, leave traces, and communicate.

With regard to Madani’s focus on domestic life, the motif of the cave seems to be interesting due to its ambiguous associations: the thin line between being perceived as a shelter (a natural, primordial home), a template for exploring and discovering, while being an eerie, dark and uncertain site. The ever-present danger of being trapped can be extended to representations of contrasting domestic realities exemplified in paintings like Shit Mom (A Living Room #2) and Shit Mom (Broken Window).

The cave is also literally a point of reference: In the shadows of Cave Interior (Ancestors), one can see two silhouettes illuminating the wall, throwing light on a huge drawing of a dynamic crowd of people that lurks above them. It’s not quite clear what’s going on: Are they fleeing, worshipping something, or are they part of a collective, ecstatic dance move (a rave?). A variation of this crowd reappears in one of three large-scale diptychs, Corner Projection (Panic). Each diptych is composed of a painting of a projector on one side that seemingly throws its light and projected image onto the adjacent painting. Hung in the corners, these works act as hinges that frame and link the works on show (39 small and intimate to large-scale paintings and 8 animation films), and prominently feature a recurrent painterly topic in Tala Madani’s oeuvre: light and projection.

Alongside the paintings, a number of recent animation films are presented on monitors (also lending bodies to these digital moving images). Often, the narrative initially unfolds in a casual and matter-of-factly manner only to take an unexpected turn, leading to the dissolution of bodily or sexual integrity and physical de(con)struction, for instance in Manual Man or Time. In a disturbing but ferociously funny manner, the animations’ protagonists seem to be trapped in loops of destructive, violent behaviour.