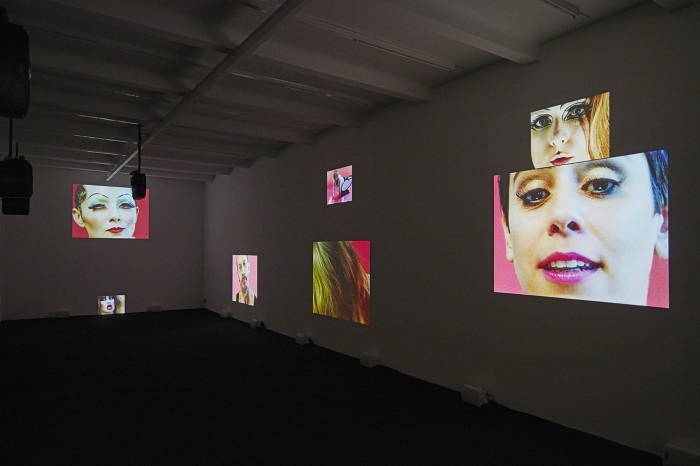 In October 2016 the artist Dara Friedman held an open audition in Berlin and actors were asked to bring a poem that was personally meaningful to them. Sixteen of these poems were recorded later that month in a photography studio in Kreuzberg on 16mm film. The artist adapted Jerzy Grotowski’s voice training techniques to fill the speaker’s body with his or her own sound waves. Through this method the entire body speaks, not only the mouth, and there is a clear understanding of the poem. This is a further exploration of “thinking with the body” which the artist has explored through previous works just as “Dancer”, “Musical” and “Play”.

Four large vertical projections consisting of four 16mm film tracks transferred to video, run as an endless loop. These four stacks consist of four, short poems each— for a total of 16 poems and are balanced on top of one another as frames of uneven size. These poems appear in a sloppy, checkerboard pattern and each poem “speaks” for the same amount of time that it is silent. Occasionally this results in all 16 actors speaking simultaneously and the effect is a chaotic assault. However, at other times their words and phrases can be heard distinctly and separate from the dim, creating glinting, suspended moments of silver clarity.

“The work I’m doing is about a poem, or a poem fragment, or lyric that you ingested as a teenager, and that then becomes a sort of part of you. What the words do (to you) and how they feel in your mouth...like an incantation that provokes receptivity or passion. Finding and feeling the words of a poem in your mouth creates a rush of energy. Sometimes this energy burns off in the excitement of seeing its own light. At other times it is a directable, aimable energy. “ Dara Friedman

The artist also presents a series of 16 unique rings, displayed in a vitrine in the small room of the gallery. The simple design of the ring is made to bring the subterranean geological phenomena of the precious metals and gemstones to the wearer’s hand. For the most part, the rings are two gemstones paired together; each stone existing in discussion with the other – an extended metaphor in which one thing, or person, or situation is regarded in relationship to another.

The poet Audre Lorde wrote that “poetry is not a luxury. It is a vital necessity of our existence...It forms the quality of light within which we predicate our hopes and dreams toward survival and change, first made into language, then into idea, then into more tangible action.”

Dara Friedman’s (b. 1968, Bad Kreuznach, Germany; lives in Miami) practice includes film and video installations. Dara Friedman’s works have been exhibited, among others, at the Hammer Museum, Los Angeles; the Miami Art Museum, Florida; the Museum of Modern Art, New York; The Kitchen, New York; and the Rubell Family Collection, Miami, Florida. Her works are included permanent collections of institutions as the Museum of Modern Art, New York. Her career survey Perfect Stranger curated by Rene Morales will open in Perez Art Museum in Miami in October 2017.

A review on “Dichter”: Frieze by Pablo Larios
www.supporticolopez.com