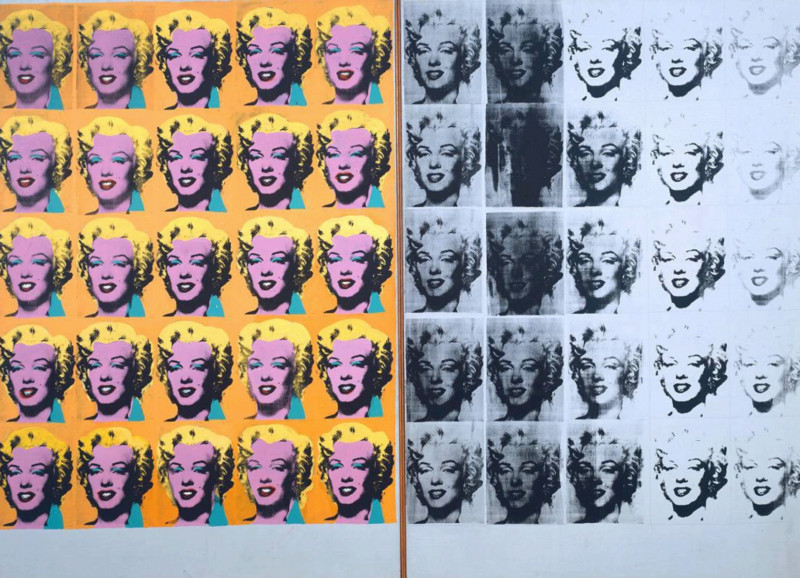 The imagery of advertising and mass culture stimulated a new vibrancy in the art of the late 1950s, which came to be called Pop. This display continues in the adjoining room.
After the austerity of the immediate post-war period, the 1950s saw a consumer boom that fuelled a proliferation of advertising and commercial imagery on billboards, in magazines, and in film and television. Sometimes playfully or ironically, artists and theorists began to consider this flood of dynamic and colourful images, analysing them with a level of attention normally associated with ‘high’ art. In 1957, the artist Richard Hamilton listed the characteristics of Pop as ‘Popular, Transient, Expendable, Low cost, Mass produced, Young, Witty, Sexy, Gimmicky, Glamorous, Big business.’
For artists in Europe, the glamour of American consumer culture - from foods and domestic appliances to Hollywood stars and astronauts - was part of an exotic, sometimes distant dream. In different ways Eduardo Paolozzi, Hamilton and others associated with the Independent Group in London utilised the sleek surfaces of advertising to examine this experience. In America itself, artists such as Roy Lichtenstein or Andy Warhol adopted the techniques of commercial art more directly, celebrating the power of instantly accessible images to reach mass audiences.
Inevitably, the rise of Pop caused controversy. When first exhibited in the early 1960s, Pop artists were criticised for their superficial incorporation of everyday imagery, while the 1964 Venice Venice Biennale, at which American artist Robert Rauschenberg was awarded the Grand Prize, was greeted as the death of high culture.
www.tate.org.uk/modern