Centenary of the St Ives Times 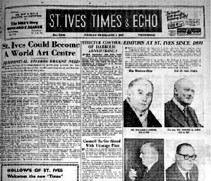 1 October 2010 marks the 100th edition of The St Ives Times and Echo, the town's local newspaper. To commemorate this occasion Tate St Ives has invited members of the community to select stories and front covers about artists from the St Ives Colony. Figures like Barbara Hepworth and Peter Lanyon, to name but a few, were not only internationally renowned artists but also local people whose lives were firmly rooted in their community and played out in their local paper.