Images Moving Out Onto Space 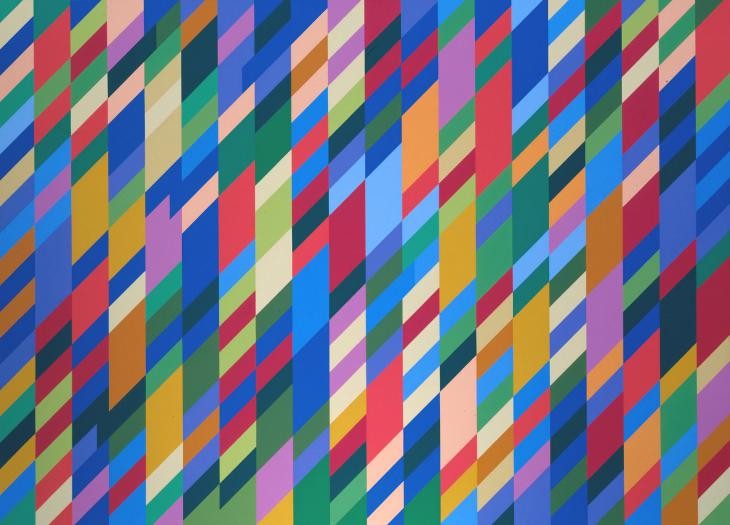 What happens when art works are set in motion? When they move around the gallery or out into the world? Images Moving Out Onto Space is an exhibition that asks these questions. The galleries are animated by light, colour and movement, and are full of bodies in all kinds of different states: flattened and fragmented, illuminated and reflected.

The exhibition brings together eight artists, with works spanning 50 years. The title and inspiration for Images Moving Out Onto Space is borrowed from a series of psychedelic kinetic sculptures that Cornwall-based artist Bryan Wynter began to make in the 1960s. The exhibition uses this series, Wynter’s ‘IMOOS’, to think about how abstraction can move us.

Coinciding with Bryan Wynter’s centenary year, the exhibition will feature an IMOOS alongside a selection of his paintings from the same period. These sculptures, which place mobile forms inside a parabolic mirror, seem to reach out around the viewer. An archival presentation of Wynter’s work is paired with archive works by and relating to Barbara Hepworth, which will coincide with her retrospective at Tate Britain.

The exhibition will also feature works by artists Liliane Lijn and Bridget Riley both of whom are interested in perception, movement and the relationship of their work to the body of the viewer. Alongside a selection of Riley’s paintings, the display will include a suite of her rarely seen prints from the mid-1960s. A pioneer of Op art, Riley has for more than 50 years produced vibrant paintings that have a disorientating effect on the eye, producing complex and arresting visual experiences. A pioneer of art and science, Liliane Lijn began her work with light and motion in the early 1960s and has continually experimented with light and matter throughout her extraordinary career. Her kinetic Koan sculptures, the first of which, Anti-Gravity Koan, was made in 1969, all refer to the idea of dematerialising solid form. Lijn uses light and motion to focus the viewer’s attention on the power of light to describe form.

One of the ARTIST ROOMS, an iconic installation by the American minimalist artist Dan Flavin, will also be presented. This work, dedicated to Flavin’s friend and contemporary Donald Judd, comprises a series of T-shaped structures of fluorescent lights, using seriality to animate the space.

Brazilian artist Rivane Neuenschwander’s large-scale participatory work I Wish Your Wish consists of thousands of multicoloured ribbons each stamped with one of 60 wishes that have been gathered from local residents over the last few months. Visitors are invited to take a ribbon from the installation in the hope that when it falls, the wish upon it will be granted. In this way the installation encourages a literal movement of the work into the space of the gallery, the town and beyond.
Installed in the curved gallery overlooking Porthmeor Beach will be a selection from John Divola’s Zuma 1970s series, beautiful photographic records of derelict Californian beach huts. The works observe these structures over two years as they are ravaged by fire, vandalism, and the artist’s own graffiti. Mostly taken at dawn or sunset, the resulting photographs are lit in such a way as to flatten the ocean view, making its destroyed buildings appear strange and otherworldly.

Nicolas Deshayes, Tate St Ives’ recent artist-in-residence, used his time in St Ives to develop some extraordinary new works, that continue his interest in the tensions between soft organic bodies and industrial surfaces. Alongside these, Deshayes has curated an exhibition-within-an-exhibition, a personal selection of bronzes from the Tate collection, presented on a series of his existing anodised surfaces.

Images Moving Out Onto Space resonates with different modernist practices from minimalism to kinetic art, to Op art.
www.tate.org.uk/stives