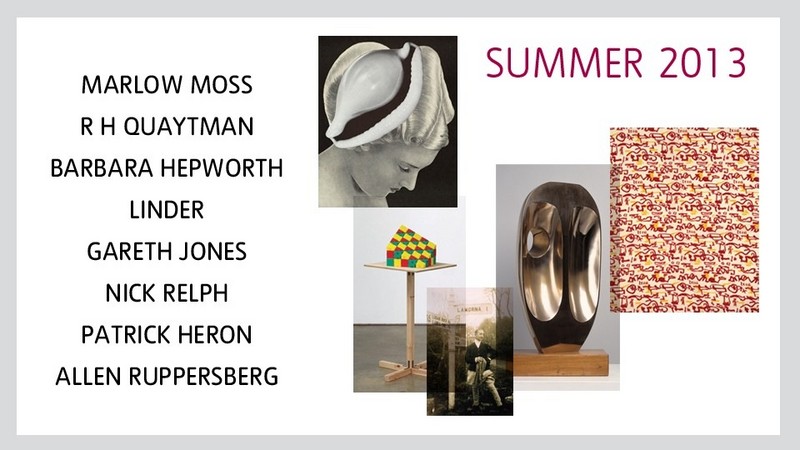 Surprising and thought provoking, contemporary and historic, the work of eight artists in the Summer 2013 exhibition responds to the histories, geography and location of St Ives, as well as to the distinctive spaces of the building itself.
Following the success of the Summer 2009 and Summer 2011 seasons, Tate St Ives continues this biennial strand, with a new series of simultaneous one-room displays. Exhibitions by Barbara Hepworth, Patrick Heron and Marlow Moss are shown alongside contemporary artists Linder, Allen Ruppersberg, R.H. Quaytman, Gareth Jones and Nick Relph, opening up various dialogues across generations of artists and addressing a number of inter-related themes including performance, fashion, design, dance and print.
The artist Linder brings together a group of her own collages with seven sculptures by Barbara Hepworth. Drawing on her research into Hepworth’s life and work, Linder reveals aspects of performance and politics in Hepworth’s sculpture, through parallels with her own radical, feminist practice. Alongside the exhibition, a video of a new ballet, The Ultimate Form, will also be screened. Choreographed by Linder and Kenneth Tindall of Northern Ballet, and performed by Northern Ballet, it is based on Hepworth’s monumental sculptural work The Family of Man 1970 and features costumes created by cult fashion designer Pam Hogg and a new score by Stuart McCollum.
The exhibition includes a selection of rarely seen textile designs by St Ives painter Patrick Heron, created while he was principle designer for his father’s textile company, Cresta Silks; a display of paintings, reliefs and sculptures by the late Marlow Moss, an often overlooked but significant constructivist who was based in nearby Lamorna; a selection of silkscreen paintings by acclaimed contemporary painter R.H. Quaytman; three works on paper by Gareth Jones to create a highly charged and very concentrated space, responding to both the architecture of the building and the occasion of the exhibition; and a recent video work by contemporary artist Nick Relph, opening up relationships between fine art, fashion and the history of textile technologies.
Also included in the exhibition will be Allen Ruppersberg’s iconic installation The Never Ending Book 2007, which consists of a collection of thousands of digitally copied images from the artist’s own research. The pages are stacked and arranged within a theatrical stage set of multi-coloured props. Visitors are invited to choose a selection of pages, assembling their own ‘book’ to take home.
Bringing together historic artists associated with St Ives alongside British and American contemporary artists, the exhibition will explore the way in which various languages, ideologies, ideas and discourses run across generations. Neither surveys nor retrospectives, the displays bring to mind the unexamined aspects of generational continuity, drawing out ideas and relationships that run through a number of practices including painting, performance, installation, video, sculpture and printmaking.
www.tate.org.uk/stives