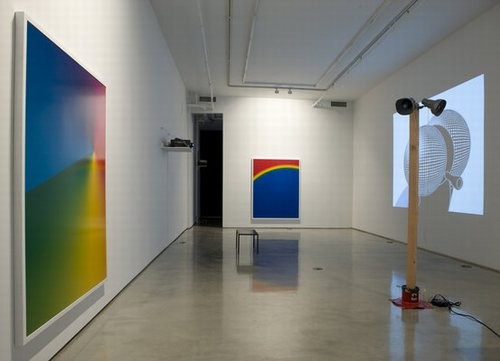 Time Out New York Team is pleased to present a three-person exhibition of new work by Cory Arcangel, Guillaume Pinard and Jon Routson. The exhibition will run from the 25th of June through the 31st of July 2009. Team Gallery is located at 83 Grand Street, between Wooster and Greene Streets, on the ground floor.
This past January Team hosted a three-person show of abstract painting by artists culled from its roster. This summer the gallery will present what is ostensibly a three-person show of video – made up of new works by Cory Arcangel, Guillaume Pinard, and Jon Routson, three Team artists.
Cory Arcangel will be represented by a new video, Drei Klavierstücke, op. 11, which debuted last month at the Kunstmuseum in Graz. Arcangel painstakingly edited YouTube footage of cats playing on pianos into an arrangement of Schoenberg’s Three Piano Pieces, a pioneering work of ‘atonal’ music. Thusly, the artist creates the illusion that the cats are playing the composition note by note. Cory pairs a resistant and withholding piece of music with coyly ingratiating images of cats in order to make the music more digestible to a less-classically minded audience. In doing so, Arcangel explores one assist- though ultimately nullified through slapstick- that technology can offer the avant-garde. Alongside the video, Arcangel will show two new works from his series of Photoshop gradient demonstrations, large abstract photographs created to highlight a very artificial tool for bending colors. Both the photographs and the video continue the artist’s explorations into the possibility that the sublime can be invoked by rapidly outdating technologies.
Guillaume Pinard, based in Marseille, creates darkly funny videos using Flash animation to draw bleak, flat realms populated by animals and insects. The acts of violent aggression and images of grotesque decomposition are softened by the manner in which they are rendered — bold color and fascinating geometric compositions belie cruel slaughter and conniving betrayals. Pinard dexterously exploits the different tools of computer animation to effectively control the shifting moods and environments of his short films, three of which will be on view.
Jon Routson, working in Baltimore, is best known for his bootleg movies — clumsy recordings of entire films made in movie theaters and shown in art galleries. For this exhibition, Routson will show work from his Spinners series, digital projections of circular images that rotate on the wall, creating a somewhat sickening feeling for the spectator. Part of the queasiness also arises from the subjects, among them Sarah Palin and Dick Cheney. Routson also built a sculpture that broadcasts books on tape for listeners. In choosing which books to record, Routson makes no distinction between literature and drugstore paperbacks, simply choosing books that some portion of the public wants to read. In an era where music, books, and movies are all instantly available on the internet, his sculpture pushes that gratification to an extreme. Visitors are here able to listen to the entirety of a book if only it were possible to stand in an art gallery for the duration of a work of fiction.
teamgal.com