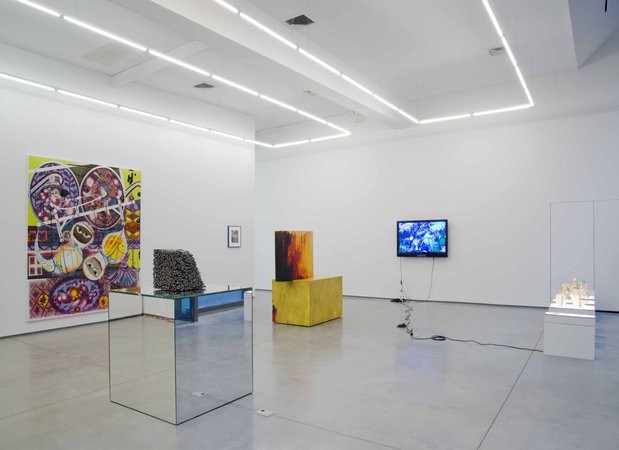 10 January – 16 February 2013
Team is pleased to present a group exhibition organized by New York-based curator Alex Gartenfeld. Black Cake will run from 10 January through 16 February 2013. The show will be installed at both Team Gallery locations: 83 Grand Street and 47 Wooster Street in SoHo.

Various anthropologists and poets tell us that even into the 19th Century, in early spring certain Gaelic villages would partake in the tradition of Beltane by making a bonfire and a mealy cake. The cake would be divided into lots, one for each member of the tribe, and dumped into a bonnet. A single chunk was covered in dust, and the person who drew this black piece was pushed into the fire.

In his 1983 book The Ruin of Kasch, Roberto Calasso described the sweetness of the Beltane cake: “The nausea provoked by an excess of sweetness corresponds to the moment when the sacrifice should take place.” Calasso’s cake is a totem that declares to represent the social body, and in this respect oscillates radically between ecstatic togetherness and isolation.

Black Cake is an inter-generational exhibition that examines artists’ use of sweetness across mediums and treatments. In common speech sweetness conveys authenticity, warmth, conviviality or affirmation; or just as likely, a certain dumbness, vacuousness and opacity.

Perhaps the most literal iteration of the black cake is the work of Cecily Brown, whose painting might seem to illustrate the allusion. The artist’s use of color and brushstrokes, luscious and stammering, suggests the continuity of organic and synthetic materials and gestures. With a similar eye for color and affect, the frontal orientation and vernacular subjects of Josephine Halvorson’s close-cropped still lives belie optical heat and an uncanny gestalt effect. For decades, Maria Lassnig has invented dark fairy tales rendered in fleshy, acrid tones. Like the Beltane cake’s sweetness, the composition of Lari Pittman’s paintings is all-over. Pittman’s images, endlessly becoming other images, embody the cake’s promise of transformation, but without expurgation.

Featured artists seize upon Calasso’s aphorism, “After the revolution, progress forgets sweetness,” looking at historic tropes in order to re-stage a more convivial time. Displayed in lines or grids, Sam Anderson’s small, multi-part sculptures reference modernist organization, but crumble into detail and narrative. The Bible Part One: These Words are Alive by Tommy Hartung is, like many of the artist’s videos, a large-scale work shot in handmade models. The scale of his semi-narrative social realist videos contrasts with the texture and density of his images. Through densely textured video and writing, Ed Atkins teases out the often-disturbing intimacy endemic to today’s hyper-real imaging technologies. Steffani Jemison’s videos comprise tropes appropriated from early cinema, drawn out to stage and suspend empathy with the subject.

Works in the exhibition address changing relationships between media, subject and cliché in contemporary image production by inhabiting familiar—and thus commercial—forms. Recognizing the rapidity with which imagery slides into cliché, Ryan McGinley’s youth-oriented photographs negotiate the terms of self-expression and the sublime. In his videos, Tabor Robak inhabits the world of the video game, imbuing the fantastic form with allegory and critique. Calla Henkel and Max Pitegoff’s collaborative photographs document performance, revising the emancipatory potentials of self-presentation using the spontaneous affect of bohemian lifestyle photography. Massimo Grimaldi’s slideshows, comprising pictures of under-privileged children in Third World countries, interrogate the power of the image-maker and the redemptive logic of charity.

In popular media, sweetness has been evacuated of its nutritional value, but not its use value. By emphasizing the sociability of form, featured artists engage the transitivity of the network, where social relations might be elaborated, functionalized and fetishized. David Scanavino manually installs brightly colored linoleum tiles to uncover the sentiment suppressed in official styles. Monica Bonvicini takes the lushly minimal surfaces of modern architecture beyond their logical ends, creating seductive, violent surfaces. In the coloring of his graffitied sculptures Sterling Ruby explores the physicality and romanticism of inscription. The cake renews the bonds of the tribe, and hopes to control the fire.
teamgal.com