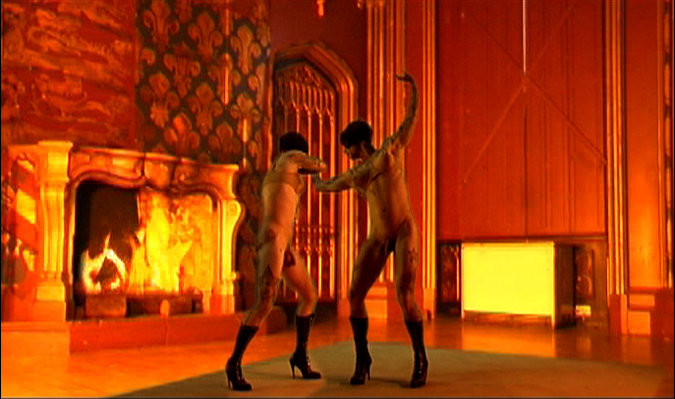 For the past two decades, Dellsperger has developed a vast, nearly overwhelming body of work, titled Body Double after Brian De Palma’s psycho-sexual thriller of the same name. The oeuvre consists of thirty video works, investigations into the conceptual, social and formal tropes that inform cinema and spectatorship. Both reverent and destructive towards his source material, the artist’s practice voraciously cannibalizes and digests iconic moments in film. The resultant works are arresting, both viscerally affecting and deeply cerebral, heavily informed by film and queer theory.

The act of doubling is among the work’s central conceits; contending not only with issues of material and visual replication, but also with the duplicative nature of film itself. Dellsperger elaborately reproduces famous movies with varying degrees of loyalty to the original texts. He most often casts just one or two actors, most often himself or the artist Jean-Luc Verna made up as women, in all roles. Certain elements – narrative chronology, characters’ original gender identities – are frequently abandoned, while others – score, dialogue – remain intact. Each artwork is the drag-queen doppelganger of its source: a dedicatedly faithful and wholly recognizable copy, but one that is forthcoming with its artificiality.

The content and the title are direct references to Brian De Palma, specifically to the titular 1984 film, which skewers Hollywood through a depiction of its underworld double – the porn industry. The title Body Double refers simultaneously to this original source material, the artist’s use of surrogate actors and to De Palma's own repeated use of three films by Alfred Hitchcock, Rear Window, Vertigo, and Psycho, as blueprints to build upon. Dellsperger’s similarly imitative works are complex and unending mirrors, reflecting their own reflections ad infinitum. He rejects the notion of artist as demiurge; the act of reframing pre-existing materialfunctions crucially and visibly at every level of his art.

The works subvert the straightforward readings of sexual identity we expect when we go to the movies. For example, a scene from De Palma’s Dressed to Kill is re-enacted by the artist dressed as a woman, portraying both halves of a heterosexual couple. The original sequence relies on ambiguity: the viewer derives excitement from her confusion as to who is following whom. The Body Double version creates a secondary queer narrative of lust and narcissistic abandon, while also leaving the original power of De Palma’s film intact. Dellsperger’s piece also acts as a metaphor for the mimetic relationship between film and life – the “chase scene” that takes the cinematic and the real as its ever-trysting protagonists.

The gallery will show all thirty extant works from the series. The program changes weekly, repeating itself mid-way through the exhibition to give viewers several chances to view all the pieces. Our Grand Street space will show one video each week as a large-scale single channel projection. The Wooster Street space will be treated as something of a lab, in which five monitors display single-channel pieces, while a triptych of flat screens exhibit Dellsperger’s multiple-channel films. Many of these works have never been screened in New York. Among the texts re-interpreted by the artist are those of such vaunted auteurs as Kubrick, Anger, Lynch, Zulawski, Hitchcock and Fassbinder; lesser-respected works chosen by Dellsperger for their pop cultural power (Saturday Night Fever, Return of the Jedi and Flash Gordon among them) and, of course, many troublesome, still controversial scenes from the work of De Palma.

Two additional screenings of Dellperger’s work will take place outside of the gallery at Anthology Film Archives, 32 Second Avenue. On 07 July at 7 PM, we will show Body Double 22, after Kubrick’s Eyes Wide Shut, accompanied by a short titled Ladies and Gentlemen. On 29 July at 7 PM, we will present the feature-length Body Double X, after Zulawski’s That Most Important Thing: Love. Both screenings are free. To reserve a seat, please e-mail rsvp@teamgal.com or call 212-279-9219.

Dellsperger has had numerous solo exhibitions at galleries and museums internationally, including Kunstbunker, Nurnberg, Germany; The Akbank Art Center, Istanbul, Turkey; La Conservera, Murcia, Spain; Midway Contemporary Art, St. Paul, Minnesota; and Le Consortium, Dijon, France. He participated in an exhibition along with Jean-Luc Verna, at FRAC Alsace, France, in June of 2011. His work is represented in numerous public collections including that of the Museum of Modern Art here in New York.