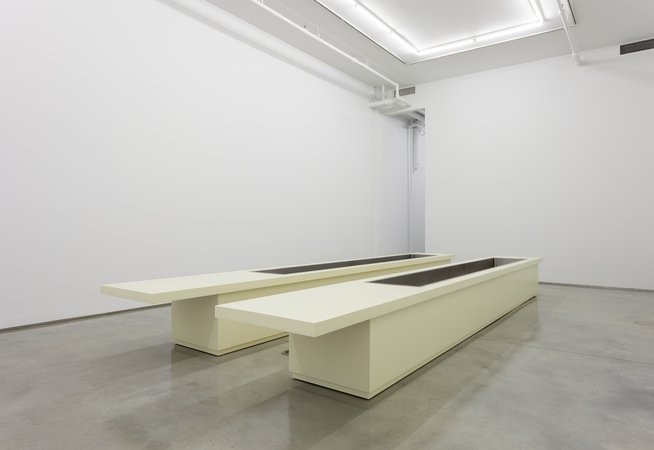 Team (gallery, inc.) is pleased to announce a solo show by New York-based artist Daniel Turner. Entitled PM, the exhibition will run from 04 May through 01 June 2014. Team is located at 83 Grand Street, between Wooster and Greene, on the ground floor. Concurrently, our 47 Wooster Street space will house Chez Perv, a collaborative exhibition by Gardar Eide Einarsson, Matias Faldbakken and Oscar Tuazon.

For this exhibition, Daniel Turner has produced three large-scale sculptures that take the form of countertops. The objects, with their immaculate, office-kitchen finish and spartan design, do not resonate with the domestic experience, however, attracting instead insidious associations with the industrial and institutional — factories, schools, feed-lots. They appear utterly familiar while also remaining ambiguous, ultimately denying the utility they initially suggest.

The sphinx-like sculptures’ proportions, scale and components render them obscure. At over twenty feet long but under three feet tall, they are simultaneously monumental and miniature, imposingly grandiose and frustratingly underwhelming. They either conform to or react against the proportions of the human body. Two of the sculptures feature long, trough-like stainless steel sink-basins but without drains or faucets. A grey film covers these metal surfaces, which was produced by allowing unfiltered water to evaporate. This sediment serves as the singular interruption of the sculptures’ otherwise sterile and pristine finish. Rather than proclaiming the artist’s hand, the vague residue seems more the byproduct of some recent activity, but whether that is cleaning, feeding, butchering or something else altogether is left unclear. Two refrigerator handles sit on the surface of the third unit, once-useful objects, extracted from their intended context and placed atop a perverse pedestal.

Turner exploits the potential for psychological violence that may lie beneath an object’s purely formal qualities, employing a fixed set of parameters culled from recognizable external sources. As a group, these sculptures occupy an unsettling middle-ground, perched delicately and dangerously on the brink of pure formalist abstraction and pure appropriative representation. Neither pleasant nor offensive, their particular shade of yellow paint is numbing, placatory. They avoid commentary or judgment altogether — the artist’s near invisibility in the works imbues them with an almost aggressive neutrality — yet their effect is profoundly disquieting. His primary act is one of isolation and presentation, forcing a perceptual encounter on the viewer rather than engaging him in a conversation. By allowing our own tertiary associations to color the experience of the works, Turner endows them with a strange emotional intrusiveness.

Turner, at 30 years old, has been the subject of numerous monographic exhibitions, both internationally and stateside. He was awarded an artist’s residency at the Chinati Foundation for this upcoming autumn. This is Turner’s first solo exhibition with Team.
teamgal.com