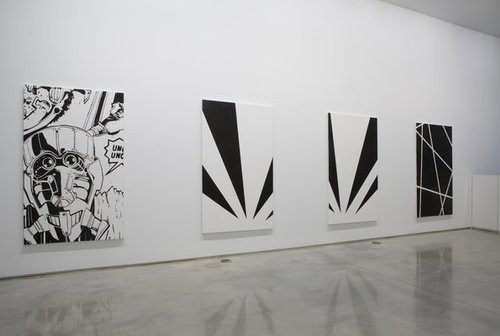 Team Gallery is pleased to present a solo show of new paintings by the Norwegian artist Gardar Eide Einarsson. Entitled Another Modern Moment Completed, the exhibition will run from the 22nd of April through the 22nd of May 2010. The gallery is located at 83 Grand Street, between Wooster and Greene, on the ground floor.

Reproduction as theft, and authorship as failed claim are the central conceits in this exhibition by Gardar Eide Einarsson. His concurrent fascinations with criminality and appropriation come together in an installation that appears to mark the jettisoning of his overt approach to political subject matter in favor of a formalist’s engagement with the legacy of modernism. Using the history of abstraction and pop as a readymade, Einarsson here distills a poetics of disruption, shifting between drippy hard edge abstraction, graphic renderings from mainstream sources, and the occasional deployment of the ben-day dot.

In preparation for this exhibition, Einarsson selected a number of images from the public domain that were of cursory interest to him: a book cover, the design on a napkin, a chain link fence, a section of the confederate flag, a comic book panel. He then set about transforming each of these pictures into an artwork. The stolen image became the property of the artist through gesture, labor, rendering. This project, however, has a secondary layer of appropriation for, after making each painting, Einarsson then immediately created another using the same image with a slight modification made through re-cropping or resizing. The “genuine” as embodied in the first painting is denied or, at the very least, called into question by the second. The drips, for example, become pastiche.

Einarsson’s paintings reflect iconic movements from the history of modernism, recalling the geometric vocabularies of artists such as Kasimir Malevich and Frank Stella, the pop-graphic derivations of Roy Lichtenstein, and the mannered nihilism of Steven Parrino. In Einarsson’s paintings the authoritative stance once required of hard-edged abstraction is usurped by subtle distortions of form and painterly accidents. His project willfully undermines the authority of these canonical movements, eschewing the purity of modernist abstraction in favor of a crafty rebelliousness. Einarsson’s interest in the historical lineage of political dissent is cunningly subsumed within the formal codes of his paintings. Through a rational use of post-modern quotations, they skillfully suggest (perhaps even mimic) an in-depth concern with a broader cultural field.

This is Einarsson’s third one-person show with Team. He has previously been the subject of solo shows in Oslo, Berlin, Köln, Paris and Copenhagen. He has participated in numerous group exhibitions throughout the U.S. and Europe. He has been the subject of solo shows at the Modern Art Museum, Fort Worth, TX; the Kunstverein in Frankfurt, Germany; and the Centre d’Art Contemporain in Geneva. A large exhibition will run at the Astrup Fearnley Museum of Modern Art, Oslo, Norway, from May 6th through August 29th, 2010. A catalogue will accompany this survey show which will then travel throughout the Nordic countries.
teamgal.com