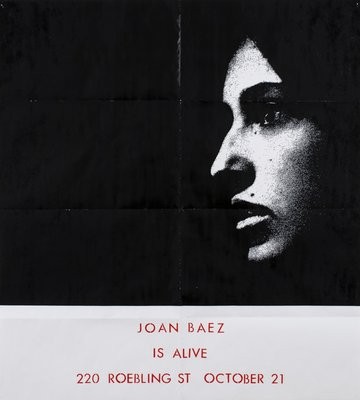 The Last Magazine, The Heavy Mental, Dazed Digital, and Time Out New York
Team is pleased to announce a solo presentation by New York based artist Marc Hundley. Entitled Joan Baez is Alive, the exhibition will run from September 15th through October 29th, 2011. Team is located at 83 Grand Street, cross streets Wooster and Greene, on the ground floor. Concurrently, our 47 Wooster Street space will house the one-person exhibition Sculptures: 1973-74 by Vlassis Caniaris.

Marc Hundley’s fabricated advertisements take the forms of posters, postcards, flags, and t-shirts that promote poetic moments from a partly imagined past. For this exhibition, Hundley presents a dozen new posters with texts and images culled from ’60s and ’70s era music, fine art, film and literature. These sentimental snapshots provide a mode for Hundley to both catalogue and evaluate personal experiences in retrospect. A folded piece of paper, a handwritten note, a found photograph, a psychedelic album cover, or a poignant lyric — each marks particular events and impressions in a contemplative diary of melodic moments.

Hundley uses time as a bookmark for a heartfelt feeling or aesthetic idea. Though often stamped with a date and address (in one case, the date that Hundley listened to Joan Baez’s “Diamonds and Rust” along with the address of a bar called “Love” in which he heard it), the celebratory announcements cloud the margins between fantasy and authenticity, past and present, and lived and felt, with a nostalgic fog. In this work, the artist creates an out-of-time similar, for example, to that evoked by Susan Sontag when she used her journals to record her favorite books and her favorite lines by the writers she most adored. Hundley, too, is a devoted enthusiast whose commemorative moments exist in the archiving of precise encounters with The Clash, Jay Defeo, Billie Holiday, Morrissey, Rainer Maria Rilke, Joni Mitchell and William Thackeray, to name a few.

Hundley uses stencil and silkscreen methods of printing and advertising production to speak to signage, typography and commercial design within his particular brand of pop poetry tableau. While tinged with playful humor and subtle eroticism, Hundley’s posters are meant to have a function, occupying a space in between ad and poem where the referent of the language is a reverie. Hundley’s work recalls the vernacular text paintings of Ed Ruscha, the surrealist gestures of René Magritte, the imagined mise en scènes of Karen Kilimnik, the nostalgic assemblages of Carol Bove, the personalized mailers of Ray Johnson, and the spare poetry of Carl Andre.