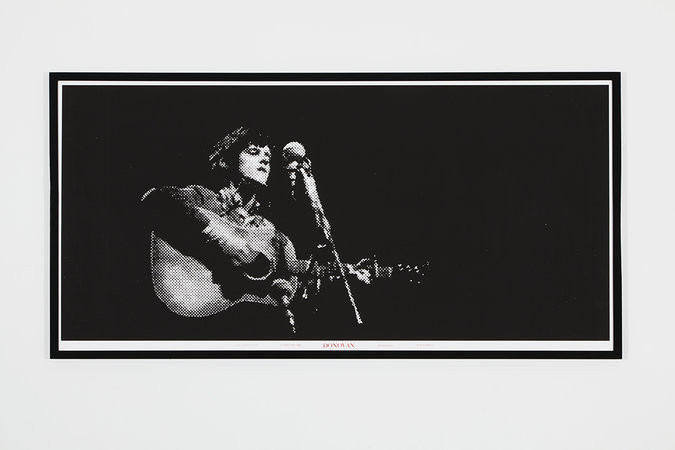 Team is pleased to present a one-person exhibition by Marc Hundley. Entitled The Waves, The Body Alone, the show will run from 05 September through 20 October 2013. Team is located at 47 Wooster Street, cross streets Grand and Broome. Concurrently, our 83 Grand Street space will house Parasitic Gaps, a group exhibition organized by Miriam Katzeff.

The title of Hundley’s show is taken from Virginia Woolf’s experimental novel The Waves. Composed of a series of soliloquies spoken by six different characters, the novel forms a vivid narrative and communicates a complex and sometimes contradictory ethos. In the construction of this exhibition, Hundley uses a strategy similar to Woolf’s, conceiving of each piece, or utterance, as in-dialogue with the others. The hand-printed canvases and works on paper form a complex constellation of references to books Hundley has read, images he’s seen, and music he’s listened to, all corresponding to significant moments in his life. The viewer may in fact draw a comparison between Percival, the seventh character of the Woolf novel, whose first-person voice is never heard, and Hundley, whose artistic output is filtered through experiencing the work of others, speaking through their lyrics and their writings.

The two benches in the center of the gallery, along with the mint green walls (the color matching the artist’s copy of The Waves), are meant to evoke a waiting room. The prints on the wall function as advertisements, perhaps incidentally related as in actual public spaces where an advertisement for a horror film might be adjacent to that for a new novel or an imminent album release. The references Hundley makes, however, are far from random. Over time, the viewer can connect a narrative thread between the seemingly disparate works; a narrative that is indeed representative of a single authorial voice. Hundley constructs his artistic identity as Woolf constructs her novel, using multiple voices and the simulacra of many different viewpoints to create the impression of a deeply personal whole. Donovan, The Smiths, Kate Bush, Thornton Wilder, Vera Andrus, Paul Thek, Glenn Gould and others function as stand-ins for his own voice.

Referencing fine art, literature and music from the 1920s through the present, Hundley creates images from the ephemera of this vintage material. Onto the surface of the subsequent, autonomous works are transcribed the date and location he experienced the original cultural emanations, celebrating the act of longing and its residual effects on lived experience. Though these works commonly suggest moments of loss and loneliness, they also offer a sentimental foothold for the viewer against despair, a source of comfort. Hundley’s fictive public space addresses the quotidian experience of waiting — for something good to happen, for news to be delivered, for our personal situation to be transformed. Waiting through a moment of stillness always suggests the possibility that everything might change for the better. The textual content of Hundley’s work is a direct invocation to the gathered viewers, as in the work Good Feeling, which quotes a song by the Violent Femmes, asking the viewer to stay with the piece or the exhibition “just a little longer”.

Hundley’s work has been exhibited in numerous galleries in the U.S. and abroad. This is his second one-man show at Team.
teamgal.com