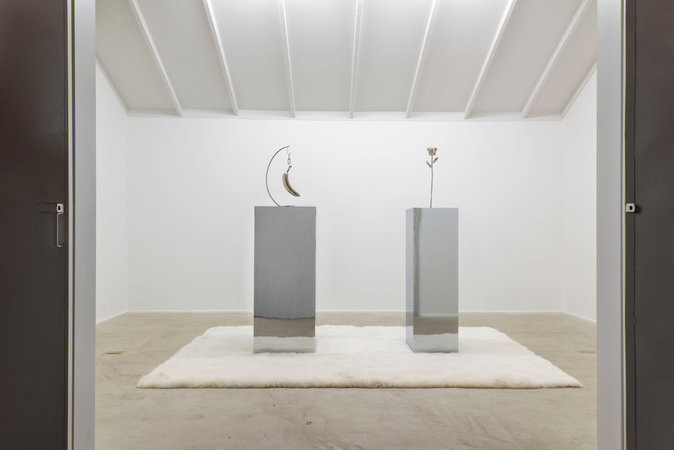 Team (gallery, inc.) is pleased to announce a solo show of work by New York-based artist Margaret Lee. Entitled Reading Into Things, the exhibition will run from 16 November, 2014 through 04 January, 2015. Team (bungalow) in located at 306 Windward Avenue in Venice, CA. Concurrently, our 47 Wooster Street and 83 Grand Street spaces in New York will house exhibitions by Andreas Schulze and Sam Samore, respectively.

Decontextualization serves as the fulcrum of Margaret Lee’s practice. Frequently pairing readymades with alternately fabricated and hand-crafted objects, the work consistently interrogates modes of display, transforming the act of presentation into a subject unto itself. The works employ their context to generate meaning; as artifice supplants substance, questions of content are rendered irrelevant.

Lee’s objects and materials are loaded with immediately identifiable referents, all of which can be read as metonymic or metaphorical surrogates for broader concepts like femininity, masculinity, commodity or self-reflection. However, her interest is not merely in evoking these notions, but in interrogating the act of signification, and the ways in which the viewer receives and processes symbols.

Reveling in the detritus of established good taste, Lee’s work intentionally evokes many of the common trappings of contemporary art, mimicking and appropriating the clichéd tropes relied upon by artists and their supporting institutions, transforming objects of luxury into objects of ridicule.

Margaret Lee has exhibited widely both stateside and internationally. She participated in the 2013 Lyon Biennale and the Hammer Museum’s 2014 Made in L.A. biennial. Recent shows include Margaret Lee/Emily Sunblad, Off Vendôme, Dusseldorf, New Pictures of Common Objects (with Trisha Baga, Lucas Blalock, Josh Kline and Helen Martin), MoMA PS1 and Closer to Right than Wrong / Closer to Wrong than Right, Jack Hanley Gallery. In 2009, Lee founded the artist-run space 179 Canal, and is currently a partner at the gallery 47 Canal. Lee lives and works in New York City.

Lee was first included in the group show Parasitic Gaps, curated by Miriam Katzeff, at Team in 2013. This is her first solo exhibition at the gallery.
teamgal.com