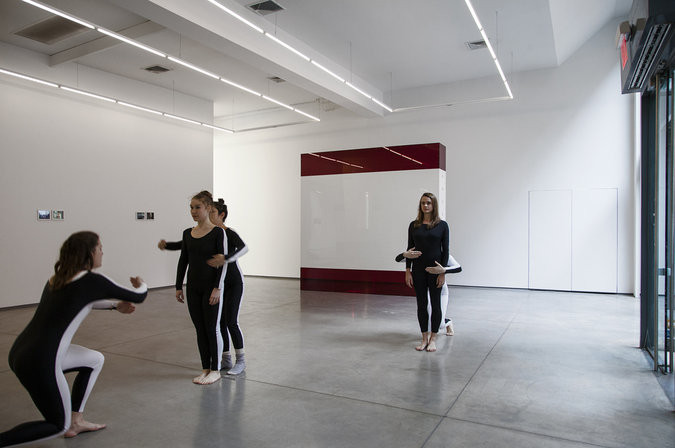 Team (gallery, inc.) is pleased to announce a solo show by Italian artist Massimo Grimaldi. The exhibition will run from 31 October through 15 December 2013. Team Gallery is located at 47 Wooster Street, between Broome and Grand. Concurrently, our 83 Grand Street space will house a one-person exhibition of new work by New York-based painter Suzanne McClelland.

Grimaldi’s artworks act as neutral conduits between the artist and viewer, founding meaning in this reciprocity. The artist destabilizes the traditional art-viewing experience through the repeated construction of different barriers. He employs what he refers to as “agents” to alter the viewer’s perception of a space and exhibition. In the past this practice has included the involvement of darkness, snakes, music, and hired people in shows. These “agents” interrupt emotional and physical access to Grimaldi’s austere, almost antiseptic pictures and sculptures, serving to engage, but also to discomfort and unsettle the viewer.

For this exhibition, Grimaldi has partially repurposed the gallery as an active dance studio, inviting a number of contemporary dance troupes to use the space for rehearsal. Roughly half of the space will be unoccupied by artworks, instead covered in mirrors. The dancers will not only practice their performances, but utilize the space as they would their own studio: warming up, changing, chatting with one another. Their presence may embarrass and confuse viewers, who will be forced to traverse bodies, movement and conversation in order to see the show’s other artworks.

Another body of work on display consists of two pairs of iPads, side-by-side, each displaying a slideshow of Google image results for a specific search term. Pictures of “Natalie Portman” and “Rosario Dawson” are paired with those of “Kabul Bomb” and “Baghdad Bomb,” respectively. There are forty images in the former sequences and fifty in the latter, so as they begin to repeat, they fall out of sync; the same pairing not appearing for long stretches of time. The works are not intended as criticism, but instead as a meditation on our perception and the uncertain characteristics of image-seduction, as well as serving as a kind of self portrait built of the artist’s passions: his fetishization of Apple products, his love of Portman and Dawson, his engagement with social causes and developing countries. The disparity between the two slideshows’ subject matter is initially jarring, but as the viewer acclimates, unintended formal similarities begin to arise and the pictures from such seemingly disparate worlds blend and fade into one another.

An additional pair of iPads display images the artist captured at MAS Children Teaching Hospital in Somaliland. These artworks serve as a means to encourage engagement with humanitarian, “non-art” issues. The brightly colored photographs capture moments of melancholy hope and innocence, avoiding the outright depiction of tragedy. The slideshows seek to engender conversation about their subject, acting in part as documents of Grimaldi’s own uneasiness with his role as artist, his fear of futility in relation to such problems as illness and poverty.

This is the artist’s second one-man show at Team.
teamgal.com