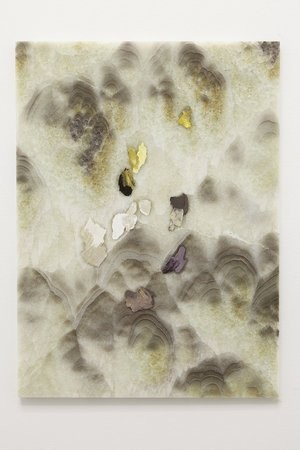 Team (gallery, inc.) is pleased to announce a solo show by Belgian artist Pieter Vermeersch. The exhibition will run from 30 March through 27 April 2014. Team is located at 83 Grand Street, between Wooster and Greene, on the ground floor. Concurrently, our 47 Wooster Street space will house Chez Perv, a collaborative exhibition by Gardar Eide Einarsson, Matias Faldbakken and Oscar Tuazon.

Working from positive and negative photographs of planes, often interior spaces or sky, Vermeersch employs gridding and color-mapping techniques associated with the likes of Gerhard Richter and Robert Bechtle. The resultant paintings are both photorealistic and abstract — exact painterly depictions of utterly ambiguous subjects. His exhibition at Team features large paintings on canvas and wall-murals.

Vermeersch’s paintings are without focal points, symmetry, or balance, but are not characterized by this lack. Charged with an underlying sense of relational aesthetics, they strip painting down to its essential qualities of light, color and space, allowing the viewer’s act of looking to combine and elevate these elements. The works are reflections on the process of image-creation. Although strongly conceptual, they posses a surprisingly powerful visual impact. The individual pieces are beautiful, while the overall effect of the transformed space is immersive and overwhelming — in a word, sublime.

Vermeersch must finish his pieces in single uninterrupted sittings lasting up to twelve hours so that they may dry perfectly evenly. He plans every facet of the process in advance in order to execute at the necessary breakneck speed. The artist arrived at his exacting, almost mechanical, painterly method by way of his pursuit of a Neue Sachlichkeit, an impersonal means of image-creation. The paintings seek a systemized anonymity, striving, in a sense, to be the end products of sheer technique.

The artist creates the wall murals using roughly the same methods as for the canvases. However, while the latter paintings act as representations of ambiguous surfaces, the murals confound an otherwise defined existing space. For example, a concrete wall interrupts one of the colored walls, jutting four feet into the gallery space, further complicating the viewer’s perceptive experience. On display in the back gallery is a slab of marble, to which the artist has carefully applied dabs of variously colored paint. Here, he makes explicit his interest in the sheerly retinal experience of painting, as one’s visual absorption of the image is essentially altered by a small amount of painted color.

Over the past 15 years, Vermeersch has been the subject of numerous monographic exhibitions throughout Europe. This is the artist’s first exhibition at Team.
teamgal.com